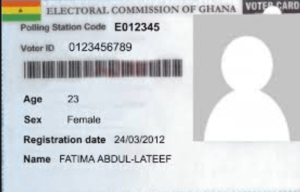 The Ghana Federation of Labour (GFL) has called on the National Identification Authority (NIA) to reconsider its decision to exclude the voter identification card as proof of nationality.

The GFL said the uproar among Ghanaians against the exclusion of the Voter’s ID cases was justified noting that “considering the fact that the Voter’s ID card applied in the 2016 general elections which ultimately elected the current President of this country “.

The NIA in May, this year rolled out the registration for the issuance of the Ghana Card amidst concerns from some citizens on the exclusion of the Voter’s ID as part of acceptable national documents.

In a press statement signed by Mr Abraham Koomson, Secretary General of the GFL, they advised leaders of the country to think through their actions and inactions to ensure social cohesion, national security, and economic development as according to them, the issue was about the security of Ghana.

“We therefore appeal to the Executive and the Legislature to consider the implications of any action to disenfranchise any Ghanaian and act appropriately “.

They questioned the rationale for the decision of the NIA to expunge the Voter’s ID card in the process of validating nationality status of Ghanaians despite the ruling by the Supreme Court in the Abu Ramadan versus the Attorney General which they affirmed the Voter’s ID card as a proof of identity as a Ghanaian after purging National Health Insurance Scheme ID card.

The GFL pointed out that, “The National Identity Register (Amendment) Regulations, 2018 LI 2356 captures the Voter ID as a critical requirement for acquisition of National Identification card”.

The Federation reminded the NIA that the process of ascertaining legitimacy of nationality was a critical human rights exercise which should not be manipulated in anyway.