As a rabid social media nut, I know that for a hashtag to trend on social media,  then the related issue has to be much-talked about in both traditional and social media.

But on Friday, July 13, and even to the following day, Saturday July 14, the hashtag, #JournalismIsFacts was among the top 10 trends on Twitter in Ghana. What makes it even more curious for me was the fact that the message captured in the hashtag was not one that people from all walks of life would be interested in.

So the question then is, who were those who made the hashtag, #JournalismIsFacts trend on Twitter last Friday?

But just to help you answer this question, let me ask again, “Have you used the road from the State House to the Council of State building in the past two weeks?”

If you have, you may have seen a banner hanged at the entrance of the Ghana-India Kofi Annan International Center of Excellence in ICT, with inscriptions, announcing a two-day media training for journalists in Accra, on the theme, “ Getting the Facts Right in the Era of social media” and the hashtag, #JournalismIsFacts written beneath.

So, this was where it all started. Selected journalists across the media landscape in Accra (TV, Radio, Online and Print) for two days, converged at this venue to be guided and equipped with the requisite professional skills to enable them to do proper scrutiny of the information they gather and distill the facts in order to present their audience with news, backboned by ascertained facts. 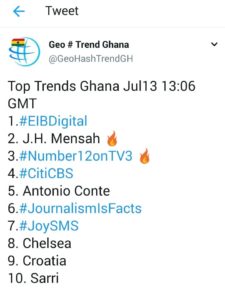 Presently in Ghana, it is not uncommon for news to break with so much public attention only to be challenged and denied by the subject in the news.

For instance, in the middle of the interoperability argument about a month or two ago, I was on a trotro going to work early in the morning when the news broke that, the immediate past Governor of Ghana’s central bank, Dr. Abdul Nashiru Issahaku had issued a press release, in which he sought to discredit the Vice President, Dr Mahamudu Bawumia’s comments and assertions on the mobile money interoperability during its launch, and to raise issues about the aborted Sibton contract.

In less than 48 hours, Dr. Issahaku issued a counter press release denying the content of the said release stating categorically that he never issued any such statement.

However, if those media houses had done a little due diligence and did some cross-checking of the source of that press release, they would have known that the press release was not credible and wasn’t issued by the former governor and would have saved themselves the damage they suffered to their integrity in the eyes of well-meaning Ghanaians who consume their news.

Allow me to take you two years back into history. Do you remember the SSNIT IT saga? One man whose name came up prominently in the saga was the then Head of IT at SSNIT, a certain Caleb Afaglo, who deceitfully captured in his Curriculum Vitae that he had a PhD  from Cincinnati University in Ohio and Bachelors and Masters degrees from Georgia Tech University in the United States of America?

Many media houses in Ghana including the very hallowed ones, carried this news, addressing the man as ‘’Doctor”, notwithstanding the fact that the Economic and Organised Crime Office had cast doubts on the authenticity of his PhD degree. And the best some media houses could do to verify the truth was to go back to Afaglo, the very man being accused to ask him if his degrees were genuine and authentic. If you were Mr Afaglo, what would your response to this be? Your guess is as good as mine.

So how did the truth about this man’s so-called PhD degree come out?

It took a simple email from Emmanuel K. Dogbevi, the Managing Editor of Ghana Business News, to Georgia Tech, the school which Afaglo said he received his degrees from to enquire whether he really studied in that school.

In less than 48 hours, the school responded to the email by stating emphatically that Afaglo never enrolled at Georgia Tech and that the school had no record whatsoever of him.

Cross-checking facts could be daunting sometimes but it could also be as simple as what Mr. Dogbevi did in the Afaglo degree saga yet more often than not no proper verification is done before news is made out of issues.

It is therefore unsurprising that, Mr. Dogbevi, the lead facilitator for the two-day training workshop, emphasized the need for verifying information before it gets into the news. He advised the journalists to always do the three basic things required for every journalist to do before publishing the news: “cross-check, cross-check and cross-check,” he said.

Participants were taken through hands-on fact-checking steps and how those facts can be organized and presented in telling the story in their reportage. They were also introduced to how social media is rapidly changing the face of journalism and how they, as journalists can effectively and efficiently combine digital journalism and traditional journalism in the discharge of their duties as professionals

After the fact-checking exercise, Head of Research at IMANI Center of Policy and Education, and news anchor at GhOne television, Patrick Kwabena Stephenson said:  “The take home for me, the need for verification of facts by journalists. In today’s era where everything is controlled and skewed according to politicians, it is important that we find out what the true facts are in the conversations we have in the public space.”

Patrick went further to say that, if the media is supposed to play its role as the fourth arm of government, then it makes sense that every media practitioner makes it a point to at least verify the facts that are consumed by the general public.

“That for me was the major takeaway from day one of the sessions because we have gotten to a point in this country where everything is debatable including facts. So this government says this and all of a sudden this is disregarded by those in opposition. And people really get lost in all of that trail.”

“So we are gradually getting to a place where we need to set the conversation right from a different point,” he added.

Clement Akoloh of Afriwakeradio.com, an online radio, shared his thought on the exercise saying, “I’ve not regretted being here. It’s been one of the most educative training programmes I’ve been to and it’s very useful for my journalism so that as journalists, the stories we present are full of facts”

And differentiate the fake news from the real news and also using social media to enhance our work as journalists,” Clement added.

Another participant, Kwaku Kyei, Head of Social Media at JoyNews, in his assessment of the fact-checking exercise remarked,

“I really enjoyed day one of the session because largely, it was on fact-checking and how we should verify our facts before we do our stories. And that for me was something extremely critical that will help us in the discharge of our activities efficiently.”

“Because today, if you don’t accurately report on the facts, you might end up in jail. As journalists, we need to be constantly reminded. And so for me, I am extremely happy I was part of this session and I hope to be part of it in the future,” he added.

Kwaku ended his remarks by saying, “I am now informed to go extra deeper to verify what I have for our audience. Probably we were doing it but today, it has kind of heightened my ideas on how I can go a step further in discharging and knowing what suits you know, the standards of journalism in our spheres. “

At this juncture, I will end by borrowing a line from Kwaku’s remarks to make a case for the hashtag #JournalismIsFacts to keep trending  on social media in Ghana.

“As journalists, we need to be constantly reminded.”

Keeping the hashtag, #JournalismIsFacts trending could just be a way of constantly reminding our journalists to serve us with news deeply rooted in undisputable facts.

By Bismark Elorm Addo
Copyright ©2018 by Creative Imaginations Publicity
All rights reserved. This article or any portion thereof may not be reproduced or used in any manner whatsoever without the express written permission of the publisher except for the use of brief quotations in reviews.