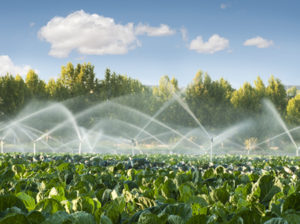 The Kpong Left Bank Irrigation Project at Torgome in the North Tongu District is being modernized at a cost of $25,503,296.00.

This would help to increase the irrigable land by about 1,500 hectares to benefit a combined population of 6,000 farmers from 17 communities.

The ceremony to mark the official start of work on modernization of the project was performed by President Nana Addo Dankwa Akufo-Addo.

The job is being done by M/S OM Metals and would expand the gravity-fed area from 450 hectares to 2,000 hectares and feed an additional 1,000 hectares outside that.

The President said the government was eager to turn the area into an agro processing hub.

He noted that a little over 10 percent of the 1.9 million hectares of potential irrigable land was being utilised, and said there could be no doubt that effective water and land management would transform the nation’s agriculture.

President Akufo-Addo said an irrigation scheme management body was going to be constituted under the Ghana Irrigation Development Authority to work with Water User Associations to manage the land and maintain the scheme.

Dr Beatrix Allah-Mensah, Acting Country Manager, World Bank, said the project had suffered “implementation challenges” in the past and expressed optimism that things were going to be different now to ensure its success.

The target was to achieve a total of about 8,000 hectares of irrigable area for the three schemes and said all would be modernised for efficient utilisation of water.

She added that the irrigation project would help to cut down the country’s estimated $2 billion food import bill through increased production of staple crops.

Dr Owusu Afriyie Akoto, Minister for Food and Agriculture, said the Ghana Commercial Agriculture Project would be expanded to 150,000 hectares in the Northern savanna zone.

Togbe Asamoah Nkwanta, Paramount Chief of Togorme, said the project presented a “big opportunity” for the people in the area to venture into large scale farming.

It had already attracted scores of multinational commercial farmers and companies, as well as over 15 farmer-based organisations, creating jobs for hundreds of the local population.

Togbe Nkwanta also spoke of the added highpoint of connecting communities in the area to the national electricity grid, roads and potable water.