President swears in Governing Board for Office of Special Prosecutor 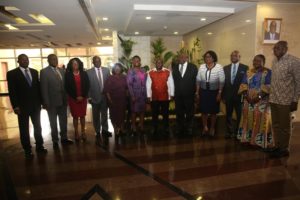 President Nana Addo Dankwa Akufo-Addo on Thursday swore-in the Governing Board of the Office of the Special Prosecutor, making the anti-corruption body now, fully ready to execute its mandate.

At a short ceremony held at the Jubilee House, President Akufo-Addo administered the Oaths of Office and Secrecy and congratulated the members for the commitment they had made to serve the country.

He told the Board that public expectations of it were high – the Ghanaian people were eager to see the Special Prosecutor’s Office fulfilled its statutory obligations.

He said the composition of Board was to ensure the independence of the Office and added that, it was both crucial and mandatory for it to make the office self-standing and independent of the Executive.

Mrs Ofori-Kwafo, on behalf of the other members, expressed gratitude to the President for the privilege and opportunity to serve the nation.

She gave the assurance that they would do all they could to help bring down corruption.