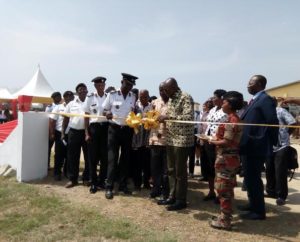 Mr Ambrose Dery, Minister of the Interior, has commissioned a smoke chamber for the Fire Academy and Training School (FATS) to enable trainees gain exposure to fire fighting before being confronted with real life situations.

The smoke chamber, named after the late GOI Hannah Yawson, a fire officer who died in line of duty eight years ago, is expected to enhance the quality of training offered by the School.

The smoke chamber is a confined environment and a basic infrastructure required in every professional fire fighting training institution to enrich its drilling programmes.

The Acting Chief Fire Officer, Edwin Ekow Blankson, speaking at the event, said over the years responders had had challenges working in confined environments because it was one area that they did not have too much exposure due to the lack of a simulator to introduce fire fighters to such situations.

The facility, he said, would therefore give trainees the exposure required to function as they should in their line of duty.

He said similar smoke chambers would be constructed at the Sekondi Fire Station and Bolgatanga to improve training.

The Acting Chief Fire Officer, however, called on government to provide an insurance package for officers who lose their lives and get injured in the course of their duty.

He also expressed appreciation to the Interior Minister for helping to procure some key equipment for fire fighting, the National Insurance Commission (NIC), Benso Oil Palm Plantation Limited and African Concrete Products (ACP) for their support in the construction of the smoke chamber.

Mr Dery commended the Command for the initiative, adding that the need for fire fighters to be trained in using Breathing Apparatus efficiently during emergencies could not be over emphasised.

He said it was key due to the kind of building materials used in recent times, which had the tendency of producing hazardous fumes and smoke which could be injurious to the health of fire fighters if exposed without respiratory protection.

The Minister said the President recognised that effective training coupled with adequate tooling was critical for effective service delivery and therefore would not relent in its effort to build the capacity of fire fighters to enable the Service discharge its mandate to the nation efficiently.

“Efforts are far advanced to procure Hydraulic Platforms to aid your fire fighting in high rise buildings. Government is determined to ensure that the Service lives up to its mandate as well as be one of the best on the continent.”

He said Government was also making efforts to recruit more personnel and to improve the supply of major operational equipment to ensure the service was well equipped.

“I hope the use of this facility will translate into efficiency and safety of our firefighters on the incident ground,” he stated.

Mahama must save Atta Mills Library from collapse – Youth

Charter to control water use in the Volta Basin