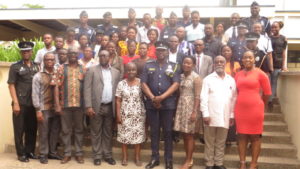 The Inspector General of Police (IGP), Mr David Asante-Apeatu, has called for a strong collaboration between the police and the media to help combat crime in society.

He said policing was a shared responsibility, although the Ghana Police Service was the organisation constitutionally mandated to protect lives and property, prevent and detect crime.

Mr Asante-Apeatu said the Police generally were to ensure peace, safety and security in the country, but the important role of the media in facilitating police professionalism could not be over emphasised.

“The Media is the voice of the voiceless, the eyes of the blind and the ears of deaf. The media has been a reliable strategic partner for the police,” Mr Asante-Apeatu stated on Wednesday at a day’s forum on Police –Media Relations in Accra.

“You (media) serve as a mirror to lay bare our shortcomings to enable us continue to learn and develop. The unique role played by the media in keeping internal security cannot therefore, be understated,” he added.

The forum, which was organised by the Media Foundation for West Africa (MFWA) in collaboration with the Ghana Police Service, sought to strengthen relations between the police and the media, for enhancing safety of journalists, and for reinforcing the media’s role for effective policing.

It brought together journalists, editors, presenters and senior police officers within the Greater Accra Region to dialogue for a mutual understanding of the roles of the Police and the media.

It was, however, boycotted by the Ghana Journalists Association (GJA) in solidarity of the alleged attack on Latif Iddrisu, a journalist with the multimedia Group.

This was because, according to the GJA, the police administration had failed to ensure justice on the matter, which left the reporter traumatised, battling with life due to the severe harm and had his skull fractured as a result of the assault.

Mr Asante-Apeatu said the Police in carrying out their constitutional mandate of ensuring general peace and security within the country, the Police as a human institution operated in a manner that appeared to threaten the freedom and independence guaranteed the media by the Constitution.

“There have even been times when journalists in their quest to seek information and also whiles covering special events such as demonstrations have come in the way of Police leading to frictions and misunderstandings between the Police and journalists,” the IGP said.

“The frequent excesses of the media and the Police should not always be of primary interest to us. These few occurrences must not mar our mutual relationship that inures to the benefit of the ordinary Ghanaian. Let us be slow in highlighting our imperfections but quick in projecting the positives of our synergy.”

Mr Asante-Apeatu noted that his administration would continue to pursue a robust transformation in the Police Service that was aimed at actualising the vision of the Service to be a world-class police service capable of delivering planned, democratic, protective and peaceful services up to the standards of internal best practices.

He said communication and media relations policy for the Ghana Police Service was being included; in their revised Service Instructions, referred to by many as the Police holy book.

Mr Sulemana Braimah, the Executive Director, MFWA, said over the last 18 months, their data showed that close to 20 journalists had been abused across Ghana; some of which were by security personnel, political parties and other organised groups.

He said whether the perpetrators of such abuses were civilians or security officers, the police had a critical role to play in addressing it.

The Director-General of the Police Public Affairs Unit, Assistant Commissioner of Police (ACP) David Senanu Eklu, appealed to MFWA to replicate similar forums in the regions for their men.

Madam Ajoa Yebaoh-Afari, Chairperson, Editors Forum, Ghana, said the Ghanaian media was operating in a minefield as the society was polarised; stating that almost everything, every development was viewed in a political light.

“This is why the media and the Police need to be able to work together in the national interest, and in harmony; to be seen as non-partisan and fair to all; doing our work professionally.”

Mr George Sarpong, the Executive Secretary of the National Media Commission (NMC), said the media and the Police were involved in the same pursue of development for the betterment of society.

UK provides £500m as credit cover for businesses in Ghana