Auditor-General and Special Prosecutor to collaborate on payroll audit 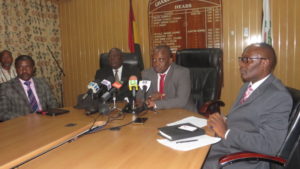 The Ghana Audit Service in collaboration with the Office of the Special Prosecutor, would from July 17, conduct a nationwide special audit, as part efforts to eliminate ghost names from the government’s payroll.

The maiden payroll enumeration exercise by the Ghana Audit Service, which would begin from the Central Region on July 17, is in line with the broader Public Financial Management Reform (PFMR).

Its objective is to promote fiscal discipline, strategic allocation of resources and efficient service delivery.

Under the special audit project, anyone found culpable, would be immediately forwarded to the Office of the Special Prosecutor for subsequent prosecution in the court of law.

This came to light at a joint press briefing on Wednesday by Mr Daniel Domelevo, Auditor-General (AG) and Mr Martin Amidu, Special Prosecutor in Accra.

Mr Domelevo said he had the mandate under section 16 of the Audit Service Act to undertake special audits of which one of them was the liabilities, which they did early this year and issued a report.

He said the Service was now going to focus on the payroll because they thought the government payroll bill was becoming too big and that there were increased allegations from the findings of some of their audit reports of people using the payrolls as a means of enhancing or for their personal economic recovery programmes.

“They put people on the payroll; so that they get the money and share. We are also very much aware that some of the people on the payroll is due to administrative lapses. But be it as it may, the financial administration regulation requires that the head of any management unit (schools, hospitals) has a duty to ensure that it is only people who are working for them in their entities are on their payrolls.”

“In the cause of this exercise, if we should find ghost names or names of people who should not be on the payroll, I will activate my constitutional mandate under Article 187 Clause 7 to disallow the expenditure and on whoever’s payroll we find the ghost names, we will surcharge the person.”

“So I will disallow and surcharge the headmaster, the head of the hospital or any government department, where we find ghost names on your payroll.

“If you think you name has been inserted on the payroll wrongly, you have to run and purge yourself quickly by refunding that money to government, before we reach out to you. Because once we come, we are not going to spend our time looking for the ghost. If the ghost is on your payroll, we are going to hold you accountable. You will pay the money back. If possible you are prosecuted.”

On his part, Mr Amidu said his outfit would continue to support the Auditor-General in discharge of his mandate to make sure that the public purse was protected; so that there would be enough resources for national development.

He said the Office of the Special Prosecutor was designed to prevent, investigate, prosecute, recover and manage assets of proceeds of corruption and corruption related cases.

He said the AG’s office and his outfit had decided to collaborate and pull resources together; in order to achieve their respective mandates.

He said while the AG was doing his work during the payroll audit, when he finds any wrong doing, he would signal the Office of the Special Prosecutor to move in and conduct further investigations.

He said by the time the exercise would be over, they would have dealt with perpetrators and their collaborators.

“We are trying to depart from the former procedures, where the AG submits a report to Parliament; it is discussed and people think that once Parliament has discussed it, there would be no prosecution.”

He said that by the time the AG’s report was ready for submission to Parliament, the dockets on such cases would be ready for prosecution.

Mr George Winful, a Deputy Auditor-General, said there were about 600,000 workers on government payroll; adding that data was directing their activities.

Dr Mohammed Sani Abdulai, Coordinator, PFMR Project, Ministry of Finance, said the exercise was being carried out by the Audit Service with support from the Ghana Integrated Financial Management Information System (GIFMIS) under the auspices of the World Bank.

Number of Ghanaians stranded in Libya not yet known