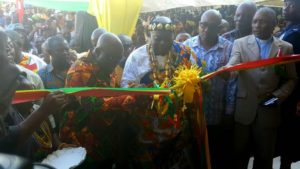 It was built with an Urban Development Grant and has 26 stores, two banking halls, six offices and a cafeteria.

Construction works on the centre began in 2015 and got completed in 2017.

The President, who was on a three-day working visit to the Volta Region, said the completion and commissioning of the facility for use proved government’s commitment to complete projects started by the past administration.

He said more students were going to benefit from the free Senior High School policy, this academic year, with the enrolment figure expected to hit 180,000 – twice, last year’s total.

President Akufo-Addo underlined the government’s determination to construct a harbour at Kedzi and called for the support of all.

He drew attention to the importance of the National Identification exercise and said it was critical to the country’s rapid socio-economic development.

He therefore asked the citizenry to give strong backing to the project, by making sure that they registered for the Ghana Card.

He repeated that the government was not interested in disenfranchising anybody.

President Akufo-Addo, accompanied by the Volta Regional Minister, and some Ministers of State, paid a courtesy call on Togbui Sri III, Awomefia of the Anlo State, where he was welcomed by an enthusiastic crowd.

Togbui Sri commended the President for his policies, and entreated him to bring them to fruition for the development of the country.

The President, as part of the tour, would interact with the chiefs in the region, inspect projects at the University of Health and Allied Sciences main campus at Sokode Lokoe, near Ho, and a Youth Centre Project in the Adaklu District.

He is also expected to inspect portions of the Eastern Corridor road project between Hohoe and Jasikan, and cut sod for an irrigation project at Torgome in the Ketu North Municipality.