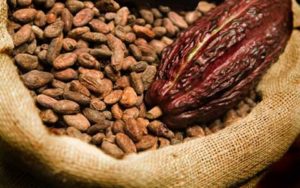 The National Service Personnel of COCOBOD on Monday embarked on an educational campaign at the Makola market and its environs in Accra to sensitise them on the nutritional importance of cocoa products.

The one-week exercise was part of the service personal project to interact with the public, especially the market women and business operators working within the Accra business enclave, on the need to consume cocoa for a healthy life.

The team is expected to visit areas including, Kantamanto, Okainshie, Tudu, Tema Station, Ministries, Circle and Adabraka, among others.

The exercise, led by the COCOBOD National Service Personnel was to promote the consumption of cocoa and create awareness of the nutritional benefits of the product.

He stressed that Cocoa has also been found to be effective in maintaining good skin health, adding that, research findings suggested that the consumption of flavonoid-rich cocoa products aids in enhancing skin elasticity, hydration, and density.

She, therefore, called on Ghanaians to make cocoa consumption a daily habit.

As a country that produces the world best cocoa, we need to consume it because it has a lot of health benefits and cut down on their health bill.

He urged them to communicate the good things about cocoa and demonstrate to them on how it is done.

He was optimistic that the exercise would help spark among Ghanaians, the benefits and interest in taking cocoa, adding that, “we are working to improve on production because we want farmer productivity to go up and increase the production of cocoa.”

He said as part of efforts to boost cocoa production in the country, COCOBOD was putting in place strategies to ensure that a greater percentage of cocoa produced in the country was processed locally to create jobs for the youth.

Castro: The myth surrounding the death of music maestro