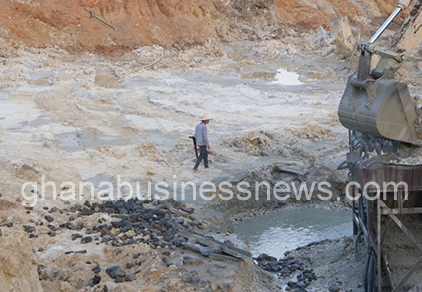 Nana Owusu Banahene, the chief of Dwease in the Asante-Akim Central Municipality, has observed that the lack of stiffer punishment against offenders of illegal mining (galamsey) is to blame for the continuous perpetration of the menace.

He said the negligence of institutions mandated to fight the illegal practice had emboldened the perpetrators to cause more havoc with impunity.

Nana Banahene said politicians, chiefs, head of institutions, the Police, as well as Metropolitan, Municipal and District Chief Executives must act decisively to stem the canker.

Nana Banahene was speaking at a town hall meeting to discuss the effects of illegal mining at Patrensah near Konongo.

The meeting was organized by the Media Coalition Against Galamsey (MCAG) in collaboration with the National Commission for Civic Education (NCCE) with funding from STAR-GHANA.

The chief said it was disheartening that those who were supposed to protect the environment and ward off the illegal miners had woefully failed, putting the lives of the citizenry in danger.

He bemoaned the lackadaisical approach by the police and the other institutions to clamp down on the menace even when citizens report the activities of the illegal miners to them.

Nana Banahene urged the perpetrators to give up the ‘evil’ practice and not sacrifice the health of the people for private gains.

Mr. Samuel Akuamoah, a Deputy Chairperson of the NCCE urged the stakeholders to join the fight against illegal mining as a civic responsibility.

He said government’s ban on illegal mining was not to deny anybody their source of livelihood but to streamline their activities to ensure sustainable mining.

They should therefore bear with government and comply with its directives to sanitize the sector.

Beware of fraudsters who promise to upgrade results- WAEC