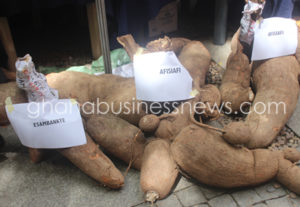 A cassava processing factory is to be established in Fanteakwa North District under the One District One Factory policy of the Government.

In an interview with the Ghana News Agency, the Fanteakwa North District Chief Executive (DCE) ,  Mr Charles Oware-Tweneboah said when the factory became operational, it would provide employment for about 2,000 permanent and casual workers.

He said Dasebre Awuah Kotoko II, the Benkumhene of the Akim Abuakwa Traditional Area and Begorohene, has allocated 9,000 hectares of land for the establishment of the factory.

Mr Oware-Tweneboah said the factory would be established by Asikas Ventures, a private investor who won the bid to establish the cassava processing factory at Aburaso in the District.

The DCE said the venture a purely private one, was being facilitated by government and construction works had begun, adding that the factory would produce starch, ethanol and gari among other cassava related products for both domestic market and for export.