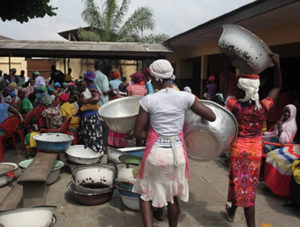 A situational analysis of Kayayei in Ghana report has been launched in Accra, with a call on all stakeholders to get involved in tackling the challenges confronting them in the country.

Madam Adwoa Kwateng-Kluste, the Head of Global Advocacy and Partnership at the Foundation for Women’s Health, Research and Development (FORWAD), who made the call said there was the need for the media, and government to develop a sustained campaign to effectively tackle the issues of kayayei.

She also said there was the need for Non-Governmental Organisations (NGOs) and the government to focus on increasing economic growth in the Northern Ghana to encourage economic growth as it has the potential to reduce the number of girls who would move to the southern part for greener pastures.

The report titled: “We Are Treated As If We Are Not Human Beings”, undertaken by Purim African Youth Development Platform (PAYDP), in collaboration with FORWARD and the Association of Church Development Projects (ACDEP) commenced late 2016.

The report identified that out of 128 individuals interviewed in the three northern regions, girls and women are at risk of migrating to work as kayayei with 90.9 per cent Upper East Region with 50 per cent in Upper West Region and 47.5 per cent in the Northern Region.

The report also called on the government to put in place interventions to address the impact of increasingly erratic rainfall and other extreme weather events by climate change which negatively affects communities who relied heavily on agriculture.

In addressing the needs of kayeyei returnees and those at risk of becoming kayayei residing in the three northern regions, the report said there was the need to increase provision of specific skills training and livelihood opportunities for young women and girls living there.

The report indicated that there was the need get information from the girls and women in kayayei before introducing any intervention for them saying, “…the most successful approaches are preceded by market research in the local area, to ensure that the enterprises created would be profitable and sustainable”.

Still in the three northern regions, the report identified that there was the need to improve on the provision of education and introduction of subsidies where appropriate.

The report also called for the creation of a sustained awareness programmes to dispel myths around kayayei, saying that many returnees described kayayei as a glamourous work, which attracted and peruaded more girls to join in.

It said “Radio broadcasts and outreach led by influential and respected community members including faith and or traditional leaders, have been found to be particularly effective in other projects”.

The report also identified that there was the need to engage with returnee kayayei to better understand why they seek to glamorise kayayei in order to reveal their motivation adding that this could open up conversation about the need to be honest on what kayayei go through and how they were treated.

On the proposal for addressing the need in Accra, the report called for an increased provision of safe houses and standardised accommodation for kayeyei adding that, “kayeyei themselves should be made aware of the type of  accommodation, that meets official standards,and  report sub-standard or illegal accommodation to the relevant authorities…”

The report said kayayei in or out of marriage must have access to family planning advice and related services, and to other sexual reproductive health services adding that “Obstetric care, especially in emergencies, must be available to all women – irrespective of whether they are married or not”.

It also called for the need to improve police conduct and response to rape and cases of sexual abuse saying that, “existing laws must be properly enforced to repair the distrust kayayei currently feel towards police, which leads many of them to not report cases”.

The report said law enforcement officers should be sensitised to the specific needs of kayayei and receive training to provide relevant and appropriate responses to reports on violence and abuse, both with regards to prevention and prosecution.

It called for the strict adherence to protocols and agreements that have been signed, protecting women’s rights should be respected, where they are being ignored or are not being correctly implemented.

The report said: “International NGOs and local organisations should collect evidence of this [not adhering to protocols and agreements] to lobby the government to provide resources for their proper compliance”.

The report said, to help combat the entrenched mistreatment “the Ghana Labour Commission must extend the Labour Act 2003 (Act 651) to cover the informal sector, adding that “Institutionalisation of minimum wage and appropriate price mechanisms in the informal sector would also contribute to reducing exploitation of kayayei and ensure the madams are held to higher standards”.

Mr Kwasi Selassie, the Youth Coordinator of the Plan Parenthood Association of Ghana urged kayeyei not to be demotivated by their current status in society but forge ahead to become the best they can become.

Mr Selassie however questioned what the authorities were doing to the critical issues pertaining to the issue of kayayei as many young people still have the desire to move from the northern regions to work as kayayei.