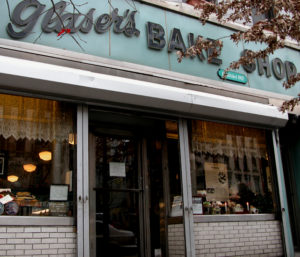 Glaser’s Bake Shop has served New Yorkers hungry for traditional German treats since 1902. The descendants of a Bavarian immigrant family are purveyors of Black Forest Gateau, custard-filled Bienenstich (bee-sting cake) and Lebkuchen gingerbread. The bakery’s closure marks the loss of a slice of German history in the US city.

German immigrants and their businesses once dominated the New York neighbourhood of Yorkville. While Germany’s visible heritage in the area has since dwindled, Glaser’s Bake Shop has stood the test of time – until now.

The German bakery has been serving up traditional treats since April 2, 1902. But, after 116 years, the bakery will close its doors for good on July 1. “It was a difficult decision,” co-owner Herbert Glaser told dpa.

“I’ve worked here for more than 43 years. I’m tired. I have to be on my feet all day and work gets harder as you get older,” Glaser said. “I’m achy. It’s time to retire.”

So the Glasers have decided to sell up.

The set-up of the shop has barely changed since 1918. The warm smell of biscuits fresh from the oven wafts through the bakery, as opera music plays in the background.

“Since we’ve announced that we will close the bakery we’ve been busier than ever,” said the 65-year-old, pointing to a long queue of customers waiting to have their orders taken. Herbert runs the business with his 67-year-old brother, John.

There are even rumours that the famous black-and-white biscuits known in Germany as “Americans” were created here around 100 years ago.

The family business has a long history. Herbert’s grandparents, John Herbert and Justine Glaser, were originally from Bavaria. Around 1890, they made the journey by ship to the United States.

As devout Christians, they went to a German Catholic church in Yorkville, where they ended up buying property. That’s where they opened their bakery in 1902. The business has since been passed down for three generations.

“Owning the building is the only thing that has kept us here for so long,” said Glaser, who still lives in the apartment above the bakery. “A small family bakery like ours can’t survive in Manhattan.”

Both the neighbourhood and the Glaser family have become less strictly German over the years. Herbert has German heritage on his dad’s side from the Glasers, while his mother is from an Irish family.

The bakery’s fare has diversified too. Local patron Richard Lynch, who has been visiting the bakery for 58 years, has a particular penchant for the scones – a traditional English baked good.

“A lot has changed in the city, all of Yorkville has changed,” the 80-year-old Lynch said. “The neighbourhood used to be German. I remember breweries, butchers and restaurants. You could walk around here in Lederhosen.”

In days gone by, immigrants chatted in German on the street, German films were shown in the cinemas and residents danced to German folk music in the evenings.

In a part of 86th Street affectionately nicknamed “Sauerkraut Boulevard,” there used to be rows of German restaurants, including the Bavarian Inn, Lorelei Dance Hall and Cafe Geiger. Another German bakery, Kramer’s Pastries, shut down in 1999.

“Small family businesses are a rarity these days,” said Pamela Davenport, who has worked at Glaser’s for 20 years. “I’ve seen kids grow up here. The neighbourhood loses a real gem,” the 79-year-old Briton said.

It’s a tough goodbye for Glaser, but he’s looking forward to some rest. He has visited Germany twice, and particularly enjoyed Munich and a trip he took along the Danube river.

“I never learned German. I kind of regret that,” he says. But it’s not too late, he adds with a grin.

“When I retire, I’ll finally have time for a course.”

Wired Innovations – Working space for the entrepreneur on the move opens