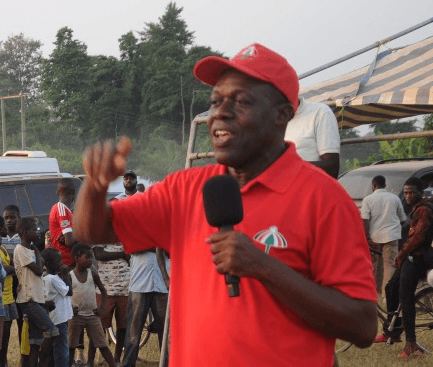 Hundreds of National Democratic Party (NDC) sympathisers have gathered at the premises of the party at Adabraka clothed in red and black mourning attires, following the death of former Vice President Kwesi Amissah-Arthur.

There was sadness and surprise on the faces of many as preparations were being made towards a press briefing later in the afternoon.

Former Vice President, Kwesi Amissah-Arthur was said to have collapsed at the Air Force Gym in Accra, where he was exercising and pronounced dead, after being rushed to the 37 Military Hospital.

Jonah Akrofie, Secretary, Ghana Institute of Social Democracy, said the sudden passing of Kwesi Amissah-Arthur was not just a loss to the party but the entire country as a whole.

He described him as a beacon of light to most and put in his best in all he did.

Sedem Davor, an NDC sympathiser, said “It’s so sad because he was one great person that a lot of the young ones looked up to, having risen to the position of the Governor of Bank of Ghana and ultimately to the office of the Vice President, a lot of us have taken him as our role model so yes it is sad news.”

However, he said his legacy would forever be in the hearts of party members as they mourn a great loss.

Mr. Amissah-Arthur, an economist, academician and politician, was Ghana’s sixth Vice President and served in office from August 06, 2012, to January 07, 2017.

He had also at different points in time, served as Deputy Finance Minister and Governor of the Bank of Ghana (BOG)

His death brings to three, the number of former Vice Presidents’ the nation had lost in the Fourth Republic after Kow Nkensen Arkkah in 2001 and Aliu Mahama in 2012.