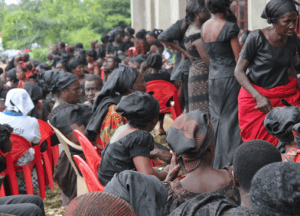 Funerals, among other rites of passage are becoming a common savour of foreign tourists in the country, and must be considered by tour operators and agencies, Mr Yao Dzide, local Tour Guide of UK Tours has said.

He said the rich culture and colourful attraction of funeral events particularly among the Akans provided valuable content for travel bloggers with good appetite for culture tourists.

Mr Dzide said this when he guided about 70 travel journalists and bloggers from selected African countries who were in Ghana for the Accra “Weizo”, through popular sites within the Eastern and the Volta Regions.

He noted that one week celebrations of deceased persons especially were major attractions.

The Tour Guide said funeral events were attended by a significant number of celebrated individuals, and had become fertile grounds for networking and “love spotting”.

Mr Dzide said tourists had also shown interest in the burial procedures, as well as the unique coffins moulded in all forms of conceptual designs used for some burials among tribes such as the Ga and Ewes to reflect the deceased’s profession, affiliation or peculiar interest.

He therefore advised tour operators to scout for such events, seek the consent of the organisers, and factor the costs into travel packages for their clients.

Weizo is an annual event organised by the African Travel Market in collaboration with the Ghana Tourism Authority under the latter’s “Eat, Feel, See and Wear Ghana” campaign.

Mr Ikechi Uko, organiser of Weizo commended government’s efforts at revamping the tourism sector, and said standard facilities, and promotion held the key to a vibrant industry in the African sub region.