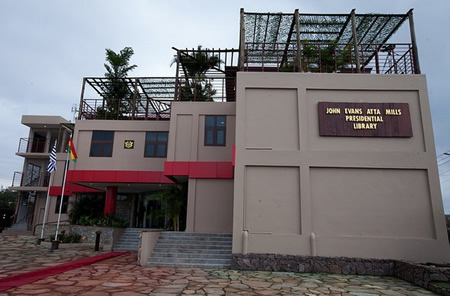 The ultra-modern state of the art facility was inaugurated by former President John Dramani Mahama on Sunday, July 24, 2016 to promote academic research and generally improve education in the Metropolis.

Sadly, the magnificent library is fast deteriorating and losing its beauty and essence after years of neglect by authorities.

The Presidential library, first of its kind in the country comes with a 100-capacity auditorium, 45-seater multi-media centre, seminar rooms and a museum that holds historical materials that reflect the life and works of the late President.

It also has a museum, which would be stocked with documents, records, collections and historical materials of the late President and other industrious Africans, a conference facility, offices and a centre to host researchers.

The edifice also has a virtual sound room that echoes the voice of Prof. Mills in his memorable speeches and images that bring to life his sojourn as a celebrated academic, keen sportsman, humble politician, devout Christian, servant leader, President and peace-loving Ghanaian.

Addressing a news conference on Thursday, Mr Stephen Doffoe Forson, Organiser of CCYDA blamed the deterioration of the facility on the failure of the 16-member committee set-up to oversee the construction of the edifice to pay the contractor.

That, he explained had forced the contractor to lock-up the place thereby denying the University of Cape Coast (UCC) being the authorised administrators of facility access to the building.

“We are calling upon the 16-member committee to pay the contractor to release the facility for use. Our investigations with the sponsors of the construction works indicated that all funds had been paid to the committee, yet the contractor is yet to receive his money,” the group alleged.

They warned saying “we are giving the committee and all other stakeholders privileged to come clean on the allegations and work with concerted efforts to put the facility to use.”

The deterioration, according to the group had been compounded by its proximity to the sea which was decomposing the metallic objects and air conditioners.

They said “the proximity of the library to the historic Cape Coast Castle told stories of the enslavement of the forefathers, the library would tell stories of a nationalist who positioned himself to the service and emancipation of his people.”

They eulogised the late President, Professor John Evans Atta Mills and described him as a peace-loving man who prioritised peace above all, never responded when insulted as it was usual in the political arena and tolerated everyone’s views irrespective of their status in life.

They stated that research centre befitted the life of the late Prof Mills who was a renowned academician, sportsman, a politician and a peace-loving Ghanaian and would go all out to protect and preserve his integrity.

The group indicated the need for managers of the facility to build strong ties with national and international partners to make it relevant to serve the intended purpose while ensuring its maintenance.

In addition to safeguarding Presidential documents and being a centre for education, it would also serve as a tourist site to rake in revenue for accelerated development.

Mounting challenges in the way of achieving SDGs – UN Report