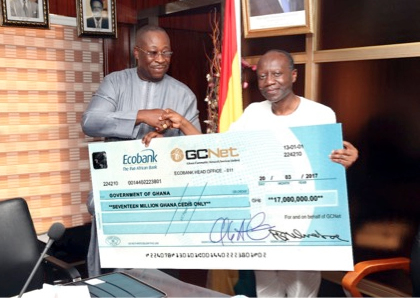 GCNet had earlier this year, paid an interim dividend of GH¢9 million in respect of government’s equity holdings.

Speaking to reporters after the presentation of the cheque to the Finance Minister, Mr Ken Ofori-Atta, the Executive Chairman of GCNet, Dr Nortey Omaboe reiterated the company’s commitment to be at the fore front of revenue mobilisation and trade facilitation.

He said as a trade development and facilitation Company, GCNet would continue to deploy electronic systems for the clearing of goods and mobilisation of tax revenue, both domestic and foreign, for the government.

“GCNet will continue to deploy and develop effective innovative ICT systems to enhance revenue collection for the government through investments in technology,” Dr Omaboe stated.

He disclosed that, currently GCNet had deployed its revenue collections systems to 65 GRA offices across the country, adding that, by the end of next month all the GRA offices would have been connected.

Mr Ofori-Atta in his remarks said GCNet was one of the PPP companies, which had consistently paid dividends to government.

Receiving the cheque, Mr. Ken Ofori-Atta acknowledged GCNet’s consistency in the payment of dividend to government.

GCNet is a Public-Private-Partnership (PPP) between government and other private entities, including Ecobank and GCB banks.

Board Member resigns in protest over corruption in African Union

Misappropriation of resources cause of corruption in education sector