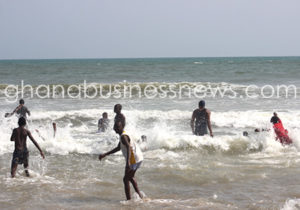 Ministry of Tourism, Creative Arts and Culture is to construct about 100 units of washrooms at popular beaches across the country to ensure good sanitation at the sites.

The Ministry is also engaging local sanitation task forces to promote and maintain “proper” sanitation at tourist sites and beach destinations, Madam Catherine Afeku, the sector Minister said during a tour of some tourist sites in the Volta Region with Tourism Ambassadors.

She said poor sanitation remained a major concern for tourists and holidaymakers and expressed the hope that the interventions would pull traffic to the beaches and other sites.

Madam Afeku during a courtesy call on Togbui Sri III, Overlord of the Anlo State called on traditional leaders and local authorities to help maintain the attractiveness and competitiveness of tourist sites.

She asked local authorities to enforce sanitation laws with fines where necessary, and encouraged the people to consider the economic value of tourism and help maintain and promote the sites.

Togbui Sri said most sites in the Region required massive facelifts and infrastructural investments to fully serve their purposes, and noted that the Region’s tourist attractions had the potential to turn its economy around.

Open defecation free campaign formed part of the tour with several engagements with communities hosting tourist sites on the need for households to own toilets.

Edem, a Musician, and Tourism Ambassador for Volta Region appealed to communities living along the shores to make the beaches attractive and promised to help woo investors to develop the sites.

Mobile money transactions in Ghana after interoperability record over GH¢12.4m in a month