Government urged not to depend on oil revenue alone

June 18, 2018 Oil & Gas Comments Off on Government urged not to depend on oil revenue alone 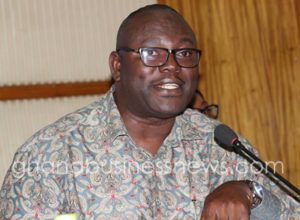 Mr Abdalla Ali-Nakyea, a Tax Consultant and Attorney has called on state institutions tasked with fiscal planning and management to look at domestic sources of revenue to boost and grow the economy as against the over-reliance on oil proceeds.

“We have left domestic sources of revenue mobilization and hinged our national budget on the expectations of oil, which continue to be the bane of troubles”.

The Tax Consultant said, the country cannot progress faster if it continually pegged its development targets on oil resources, saying, “we are in the second quarter and oil prices are not so well, FPSO Nkrumah is also shut down for maintenance. Where are we heading to as a country?”

Mr Ali-Nakyea, who gave the advice during a workshop organized by the Institute of Financial and Economic Journalists (IFEJ), in partnership with German Development Cooperation (GIZ),  said “Ghana has no business borrowing if the right structures were harnessed for its development”.

The workshop was to help financial and economic journalists under the IFEJ to have a better understanding of the current Mineral Development Fund (MDF), Mineral Revenue Management in Ghana and the Mining Revenue Governance Framework.

He said “The monkey has a trick, before leaving a branch, his hand is on another, we have the forestry and quarry sector to develop together with other natural resources…we have no business borrowing, all we need to do is to stop the black exploiting the black syndrome and move from the “Paradox of Plenty”.

“To the Tax expertise, there were so many innovative ways to generate funds internally, block some loopholes in tax administration and contracting and also do away with greediness, and rather sacrifice more for the betterment of the country.

“Why property rates when we cannot properly evaluate properties and tax accordingly to raise more funds…our assemblies must be trained by the Ghana Revenue Authority as directed by ACT 791, to make them more empowered for the task ahead”.

Mr Emmanuel Kuyole, Executive Director, Center for Extractives and Development Africa, wondered why Ghana continued to give stabilization clauses after 22 years of democracy and its associated peace and tranquility.

He said it was however, worrying that since 2016, when the MDF was instituted, issues with community development skills and disbursement continued to be a major hurdle to breakthrough.

Mr Kuyole said citizens understanding of the extractive sector, in particular, in recent times, was very key in order for them to demand accountability from duty bearers.

“We are talking about the political Tripod here: we have the rules, the institutions and we need to create the needed understanding among the citizenry to ensure that citizens demand their due from state actors”, he added.

According to him, when the citizenry are up to the task on demanding answers from duty bearers, they often times did the right thing as against low citizen participation.

Mr Kuyole therefore entreated the media to educate the citizenry on issues of developmental and national concerns “as we strive for a better Ghana”.