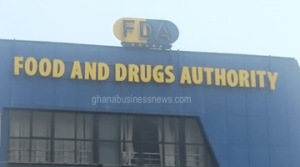 “We are of the firm belief that speedy trail, coupled with the imposition of penalties as prescribed by the law, will act as a deterrent to these unscrupulous persons and serve as notice to persons that will desire to endanger the lives of Ghanaians”, Dr Sammy Ohene, Chairman of the FDA Board has said.

Speaking at a day’s sensitisation workshop for the lordships and ladyships of the High Courts and Circuit Bench in the Region, Dr Ohene, said the Authority had long desired to have such engagement with the Judiciary to discuss healthy ways of fighting the menace that confronted the FDA in regulating food, drugs, herbal medicinal products, and related products.

He noted that it would have been an ideal world if participants within the food and drug industry put the health of consumers above profit.

However, because profits have often been put ahead of health, laws have been passed by the state to check “these unscrupulous persons”.

The Judges were sensitised on the work of FDA, in particularly, the Public Health Act, Act 851 which was passed into law in 2012.

The FDA also seeks to discuss ways to partner the Judiciary to fight the menace of counterfeit and fake products in Ghana.

Mrs Delese Mimi Darko, Chief Executive Officer of the FDA said: “They know our Act already but this will enable them to better understand our law and our work, how we regulate medicine, how we regulate food, cosmetics and households chemical substances and even clinical trials and tobacco and substances of abuse.

“So that when we have people who go against the law and we have to prosecute them, the judges will be able to better deal with such offenders of the Food and Drugs Law”.

She assured that the Authority would extend such engagements to the regions.

Justice Dennis Adjei, a Court of Appeal Judge who doubles as the Director of the Judicial Training lnstitute, said because of the comprehensive nature of the law passed six years ago, there was the need for the judges, including himself to understand, appreciate and apply them in accordance with  law.

He said there was also the need to appreciate the Policy that led to the law of FDA and be able to understand and apply them.

Justice Adjei on behalf of the Chief Justice, Mrs Sophia Akufo, reiterated the need for the FDA to extend the sensitisation to other areas of Kumasi, Sekondi, Koforidua, and in the northern sector, saying, “if we end here, we disadvantage the Judges in other regions”.

She however opined that if need be, there should be a review of the law that currently provide for the payment of a fine or term of imprisonment.

Mrs Cynthia Dapaah-Ntow, Head of Legal Division, FDA, said the work of the Authority was to protect public health and safety and from insanity conditions, as well as from deceptions.

She said all advertisements on food and medicine should have approval from the Authority before airing in the media, and urged the media to desist from advertising any unapproved adverts.

She also appealed to her senior colleagues on the Bench, to apply the approved minimum or maximum penalty unit or sentences to offenders of the Public Health law.

Mr James Lartey, Public Relations Officer at FDA said most often, the media houses go ahead to advertise food and products, which had not been approved by FDA, even though they had been cautioned severally not to do so.

He warned that, FDA would not hesitate to charge such media personnel for prosecution, should they continue to air unapproved adverts.