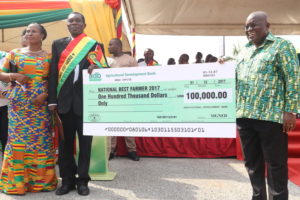 Mr Philip Kwaku Agyemang, the 2017 over all best farmer on Thursday, received a cheque for GH¢440,570.00 as his prize at a short but impressive ceremony in Accra.

The presentation was done by the Ministry of Food and Agriculture (MOFA) in collaboration with the African Development Bank (ADB), its sponsors.

Mr Patrick Ankobiah, the Acting Chief Director of MOFA, who presented the cheque on behalf of Dr Afriyie Akoto, the sector Minister, said government was proud of farmers for their contribution to the well-being and sustenance of the Country.

Through your efforts, food and revenue are increased and that makes Ghana what she is, he added, thus the need to keep special covenant with the farmers by honouring them to demonstrate how much you are valued.

Dr John Kofi Mensah, Managing Director of ADB in a speech, said the gesture was instituted in 2001 as part of the bank’s corporate social responsibility to the country.

Year after year, organisers of the Farmers’ Day seek to improve the celebration by making it dynamic as well as explore ways of making it better, citing that initially, winners were given Wellington boots, radio “akasanoma” and then a three-bedroom house.

However, beneficiaries expressed contrary views on the house and asked for its equivalent in funds to invest in their work by buying more agricultural inputs, employ more workers, among others, Dr Mensah noted.

He said as a listening bank, ADB in consultation with other stakeholders gave in to the concerns of the beneficiaries and moved from the traditional three-bedroom house to the cedi equivalent value of the $100,000.

Dr Mensah explained that Mr Agyemang had presented a proposal as to how the money was going to be utilised including; the renovation of a 20-unit poultry structure, buying of over 30,000 growers and engaging more hands.

The GH¢440,570.00 has been transferred into the account of the award winner, the Managing Director revealed.

He said ADB was committed to ensuring that not only farmers benefitted from their work but the entire country and the bank would provide professional financial advice to farmers and implement strategies to de-risk agriculture and has created additional departments; agricultural value chain, Agricultural Finance Department Venture and Agricultural Desks in 36 out of the 78 banks to that effect.

Mr Davis Narh Karboe, Chairman of the Award Winners’ Association called on government to explore ways of improving agriculture, citing mechanised agriculture and bio-technology and urged the media to maximise their attention to agriculture.

Mr Agyemang, thanked government and ADB for supporting farmers and said the money would be used for its intended purpose to benefit especially the youth.

The move, he said would be a motivation to him and his colleagues and would attract new people into the sector.

ECOWAS to hold meetings on sustainable energy in Accra