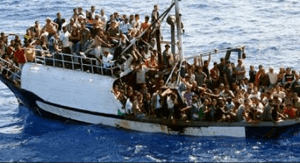 While the rest of the world and humanitarian organisations reel over the tragic loss of human lives in the Mediterranean and the desolate deserts of the Sahel, and some European countries are scampering around to deal with the situation – as young men women and children risk their lives to trek through the desert and board makeshift boats to try and flee economic hardships, conflict or discrimination and some for the mere desire to relocate to Europe for a better life, migrant smugglers who are exploiting their vulnerability are making several billions of dollars from the illicit trade.

Migrant smuggling in all regions of the world yielded a total of $7 billion in 2016 – according to the first Global Study on Smuggling of Migrants from the UN Office on Drugs and Crime, (UNODC). This amount, the report says is equivalent to what the United States or the European Union spent on humanitarian aid globally in the same year.

The report says at least 2.5 million migrants were smuggled in 2016 through 30 major smuggling routes worldwide and finds that the demand for smuggling services is particularly high among refugees who, for lack of other means, may need to use smugglers to reach a safe destination fleeing from their origin country.

“This transnational crime preys on the most vulnerable of the vulnerable. It’s a global crime that requires global action, including improved regional and international cooperation and national criminal justice responses,” says Jean-Luc Lemahieu, UNODC Director of Policy Analysis and Public Affairs.

The International Organization for Migration, states that there are thousands of deaths due to migrant smuggling activities each year. Many smuggled migrants die from drowning, whereas others perish due to accidents or extreme terrain and weather conditions. Available records show that the Mediterranean appears to be the deadliest route, with around 50 per cent of the total number of deaths

The report concludes that, in order to tackle the crime of migrant smuggling holistically, there is the need to take into account all of its contributing factors and not only the geography of the crime and make regular migration opportunities in origin countries and refugee camps, more accessible, including expansion of migration and asylum bureaus in origin areas will reduce smuggling opportunities.

The report also calls for awareness creation in communities of origin about the dangers involved in smuggling, as well as improved regional and international cooperation and national criminal justice responses.

It is estimated that 171,000 migrants arrived in Italy from North Africa in 2015, the highest number ever recorded, which exceeds the 2014 record of 170,100, according to reports citing Italian authorities.

In 2016, the year seen as the deadliest for those trying to reach Europe by sea, the International Organisation for Migration’s (IOM) Missing Migrants Project recorded 5,085 migrants and refugee deaths in the Mediterranean, compared to 3,777 in 2015 and 3,279 in 2014.

The organization puts the total for this year at 3,682 migrants rescued and 171 bodies retrieved.

“The destiny of the African youth is not at the bottom of the Mediterranean sea,” says Dr. Akinwumi Adesina, President of the African Development Bank, at its just ended 52ndAnnual Meetings in India.

“The Mediterranean sea has become a graveyard for Africa’s youth. Every day, we see images of what would appear to be a continent racked by conflict and poverty, and people risking – often losing – their lives in an attempt to flee,” says Dr. Kanayo F. Nwanze, President of the United Nations International Fund for Agricultural Development in an editorial in 2015.

By Emmanuel K. Dogbevi & Bismark Elorm Addo
Copyright ©2018 by Creative Imaginations Publicity
All rights reserved. This news item or any portion thereof may not be reproduced or used in any manner whatsoever without the express written permission of the publisher except for the use of brief quotations in reviews.

Dr Obengfo applies to the High Court for bail