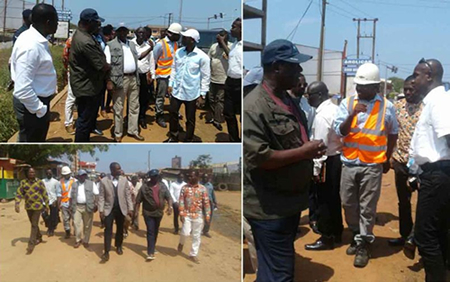 A-7.5-kilometre dual carriage road stretching from the Kofi Annan Peacekeeping Centre to the main Spintex Road Junction that stalled for almost two years due to non-payment of the contractor by the previous government will resume next week.

This follows payment of GH¢16 million out of the GH¢35 million outstanding debts owing the contractor, Malin Investment Company Limited, by the current government.

The contract for construction of the road was signed between the contractor and the government on July 5, 2015, and work began on July 7, at the cost of GH¢62 million, and was expected to be completed within 24 months.

However, work on the project stalled in 2017 due to non-payment of work done by the contractor by the previous administration.

This came to light when the Minister of Roads and Highways, Kwasi Amoako-Atta, led a team of engineers and technocrats from the Urban Roads Department, to inspect work in Teshie in the La- Nkwantanan Municipality of the Greater Accra Region on Tuesday.

He noted that the stretch was one of the strategic road networks the Nana Addo Dankwa Akufo-Addo-led government had set out to complete within the stipulated duration as part of efforts to enhance socio-economic activities of the people.

The Minister warned that any encroachment on the stretch would be demolished, saying;‘‘This is one of the important roads and it’s so strategic to the development of this country and to the people of Teshie’’.

‘’All strategic roads will be fixed by the government and my Ministry is under instruction to ensure that this road is fixed as soon as practicable,’’ he added.

Mr Amoako-Atta said his outfit had extensive discussions with the contractor and the consultant to complete the project on time, and assured that any illegal structures on the road reservation would be demolished without compromising on national interest.

‘‘There is no way the developers will be allowed to stand in the way of development and this road must be constructed for public good and we’ll never allow individual selfish interest to supersede that of the nation,’’ Mr Amoako-Atta assured.

The Minister said all the necessary legal procedures would be followed to pull down the illegal structures, noting that a meeting would be conveyed among the key stakeholders to resolve all the knotty issues regarding the encroachment on the stretch.

He asked all illegal encroachers on the road to stop work with immediate effect.

However after completing a significant portion of the work, government failed to pay them, hence the decision to stop work.

Currently, he said, about 63 per cent of the work was done, which government had paid a paltry sum with GH¢25 million outstanding debts.

In spite of the inconveniences created by non-payment of work done so far, Mr Kpolu gave the assurance that, it was ready to resume work by next week as directed by the Minister.

The Member of Parliament (MP) for the area, Dr Okoe Boye, commended the government for the zeal and determination shown to complete the project.

He said the road served about one million residents in the eastern part of Accra and connected four constituencies and referral hospital (LEKMA) Hospital.

The MP assured that he would continue monitoring the construction work and make sure the contractor was paid on time to avert any delays.

Government must be involved in the running of football – Ade Coker