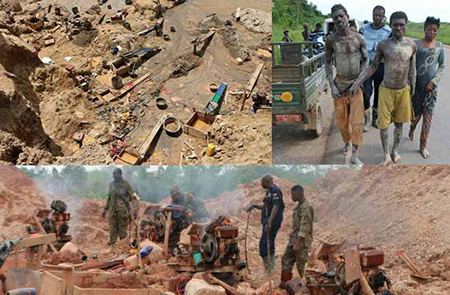 Operation Vanguard, led by Colonel Michael Amoah-Ayisi, the Commander, has arrested eleven illegal miners on the Tarkwa-Ayanfuri Road during an operation conducted between Ayanfuri and Bawdie.

The items confiscated were 158 Chang fan platforms, 15 water pumping machines, a KIA taxi cab with registration number AS 226-16, and motorbikes among other mining equipment.

He said the Team also seized a substance believed to be Mercury and, together with the other items, would be used as exhibit for prosecution.

Sq. Leader Agyei said: “Operation Vanguard is by this operation sending out a strong warning to illegal miners across the country to desist from such acts. This will enable government to structure the mining sector to allow sustainable mining.”

He called on all Ghanaians to help stop illegal mining now and in the future.

The dynamics of music in Ghana has changed – Ex Doe