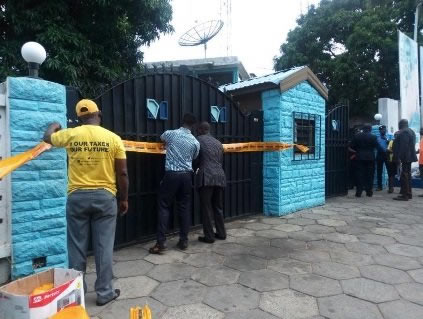 The Ghana Revenue Authority (GRA) on Wednesday shut down Metro TV for owing tax of GH¢2.3 million over the period of 2014 to 2018.

The action by the Debt Management Compliance Enforcement Unit of GRA follows the Authority’s resolve to improve revenue generation and enforce tax compliance.

Mr Kwasi Bobbie Ansah, Assistant Commissioner, GRA, in charge of Communications and Public Affairs, said they conducted an audit and came up with a debt total of GH¢2.3 million, which have gone through all the necessary processes.

He said the GRA had given them enough notices but they refused to do what was expected of them.

Mr Bobbie Ansah said: “we have gone through the whole process for them to come and make payments, but unfortunately our demands have been met with silence so we have to come and do what the law expects GRA to do.”

He stressed that the entire network has been shut down and until they do what the law expected them to do, the place would remain closed.

He noted that this was also to serve as a wakeup call for other companies who owed taxes to make it a point to pay before the GRA visited their premises.

“We have talked about the tax amnesty and we appeal to businesses to take advantage of the tax amnesty otherwise when the period elapses , from September 2018, the GRA would come after companies both registered and non-registered that owe”.

IFC to invest $60m in Ghana and seven other African countries