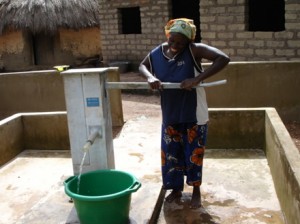 The Chinese Government has so far provided 1,000 borehole pumps for the benefit of 300,000 inhabitants in some deprived communities, in six regions, under the Ghana-China One Thousand Borehole Project.

The project is to support the attainment of the United Nations Sustainable Development Goals Six (SDG 6), which aims at ensuring access to clean water and sanitation for all.

Under the project, an average of 160 borehole pumps have also been provided in six regions, including the Volta, Western, Eastern, Northern, Brong Ahafo and Upper East regions, while some local people have been trained to repair and maintain the facilities when they develop any fault.

The agreement for the execution of the project was signed by the Government of Ghana and her Chinese counterpart in 2015, but the actual ground work began in February, 2016.

The project would come to a close by December this year, thus providing one borehole to every 300 inhabitants in the beneficiary regions.

Mr Huang Xianzhou, the Project Manager, Zhongmei Engineering Group Limited, the implementing firm, which is executing the Project, told journalists after their inspection of some of the facilities in the Eastern Region that the support also formed part of the Chinese Government’s aid to Ghana.

He said it was geared towards enhancing the bilateral relations between the two nations.

Mr Xianzhou, explaining the various processes involved in the execution of the Project, said there were 10 technical teams that were deployed across the beneficiary regions.

They were responsible for siting, drilling, testing and fixing metal pumps on the various boreholes.

He said the Project Team engaged 100 Ghanaian workers in in compliance with the Local Content Legislation.

Commenting on some challenges the team encountered, the Project Manager said they spent extra funds to replace five metal pumps that were stolen by unidentified persons in some communities.

Mr Xianzhou, however, expressed appreciation to the Government and the local communities for their friendship and cooperation for ensuring the success of the project.

At Nana Boame, one of the communities in the Ayensuano District, Opanyin Kwame Tata, an 80-year old mason, told the journalists that before the construction of the borehole, the more than 100 residents in the area depended on a small pond, which they shared with cattle and other livestock.

He said the Chinese intervention had brought a lot of relief to the community as they now had potable water for cooking food, bathing, washing and other activities.

At Asuboi in the Kraboa Coaltar District, Mr Daniel Ahondo, a 78-year old farmer, said the community members used the Kua River, which flowed from the Kyebi Mountains, as the source of drinking water, and thus, expressed appreciation to the Chinese Government for making life better for them.

The pupils and teachers at the Santramor M/A Kindergarten and Primary School in the Suhum Municipality also expressed their gratitude to the Chinese Government.

Madam Linda Alhassan, the Head teacher of the School, said before the borehole, the children often travelled long distances to fetch water from the forest, which adversely affected their academic performance.

However, upon completion of the water facility, she said, it had significantly enhanced children’s academic work.

“The children do not have to use the instructional hours to fetch water and this is gradually improving their academic performance”.

At Dago, a farming community in the Akuapim South District, Madam Adisa Tahiru, the Assembly Member of the area, said the more than 600 inhabitants in the town hitherto, depended on Dago Stream as a source of drinking water their household chores.

However, she said, the Chinese intervention had greatly enhanced their daily activities and expressed profound gratitude to the Chinese government for providing two boreholes to them.

Jasper Quarshie, the Water Technician Engineer at the Suhum Municipality, said there were cordial relations between the project supervisors and himself, which ensured the smooth implementation of the project.

He said there were about 25 communities in the Municipality that were in dire need of potable water and appealed to the Chinese Government to extend the support them as well.

Elimination of rabies cannot be achieved by one sector – FAO

Stakeholders discuss risk management in the oil and gas sector