The suspended District Chief Executive of Denkyira-Obuasi, who was in office when Major Maxwell Mahama was lynched in that area a year ago, Daniel Appianin has been appointed the Deputy Director General of the Ghana Maritime Authority.  It is not clear when he was appointed, but his photo is posted on the Authority’s website alongside other Management Team members.

Sources familiar with the Authority say it is the first time a Deputy Director General has been appointed in its 16 years of existence.

Following the gruesome murder of the military officer a year ago, Appianin was suspended by the President. He was also criticized for his pronouncements on the matter in the media, and drew comments from Vice President Mahamudu Bawumia – the Vice President indicated that those comments would be investigated. Mr. Appianin had told the media among other things, that he was unaware of the presence of the military in the area.

Major Mahama was reportedly on duty as commander of a military detachment sent to protect some mining sites in the area when the tragedy occurred. 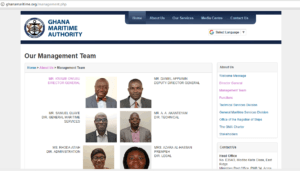 The Minister of Local Government, Hajia Alima Mahama subsequently announced the suspension of Appianin and the appointment of the deputy Regional Minister, Thomas Agyei Baffour to act in his stead.

The letter announcing his suspension among others said: “I am further directed to inform you of the appointment of the Hon. Deputy Minister, Central Region, as the acting District Chief Executive for Upper Denkyira West pending further investigations regarding the conduct and performance of Hon. Daniel Appianin. This directive takes immediate effect.”

The decision to suspend the DCE was taken by President Nana Akufo-Addo and announced by the Minister of Local Government.

“We need to have a good view on that, find out what happened and thereafter, we will look at his actions and decide whether he should be relieved of his position. But in the interim, he is on suspension,” the Minister told the media.

There is however, no report in the public domain on what the said investigations found. Officials of the Ministry of Local Government are unaware of any such report. There is neither a report indicating that his suspension has been lifted.

Appianin before his appointment as DCE, was the Upper Denkyira West Chairman of the ruling New Patriotic Party (NPP). He reportedly received an overwhelming 23 out of 23 votes cast at the District Assembly to become the DCE. He is a teacher by profession. It’s been difficult trying to establish if he has any background or training in the maritime industry.

The Authority was established under Act 630 of 2002 and charged with the responsibility of monitoring, regulating and coordinating activities in the maritime industry.

Information on its website says the Ghana Shipping Act, 2003 (Act 645) mandates it to implement Ghana’s flag state responsibilities by ensuring that ships registered to fly the Ghana flag are seaworthy and their operations comply with standards and regulations in force.