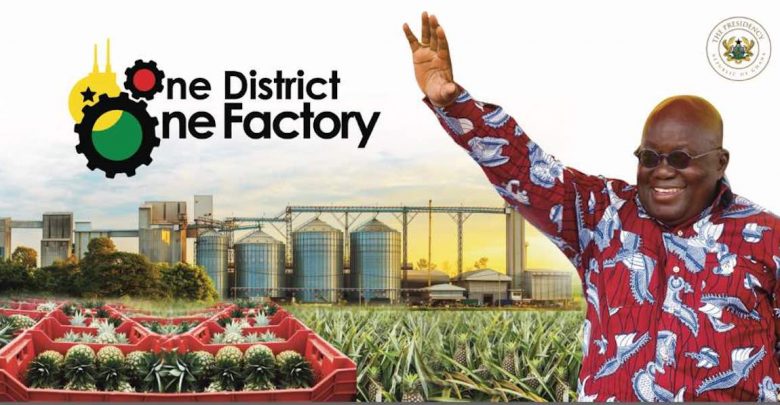 Three factories  are to be established in the Asuogyaman District  under the One District One Factory programme  of the government .

Disclosing this to the Ghana News Agency (GNA), the Asuogyaman District Chief Executive (DCE), Mr Samuel Kwame Agyekum said under the project, a poultry processing factory would be established at Adjena to provide employment for over 300 people, a piggery and a pork processing factory would be established at Nkwakubew to employ 500 people and 1000 jobs would be provided by a paint factory at Mpakadan.

He said, the Assembly was also looking out for viable investors who could add value to cassava, maize and fish that were produced in the district adding that preparatory processes had gone far for the poultry and the pork processing factories to take off soon.

Mr Agyekum said, the poultry factory per the analysis of the investors was to massively increase local production of poultry products to help reduce drastically the importation of frozen chicken into the country.

He indicated that as part of measures to boost investor confidence in the area, three major economic roads in the district had been awarded on contract for rehabilitation.

He advised the youth to be patient since government was focused and fervently working towards creating jobs for all to work.

The Project Leader for Ghanaian Youth In Poultry Production Limited(GYIP), implementors of the poultry project,  Mr Daniel Wiafe-Yeboah said the project will have three sites,  Adjena one of the sites would have  a slaughter plant for the birds, a feed mill and an out-grower farm with a capacity of 50,000 birds.

The six acres land at Cartepillarso, the second site will serve as out grower farm with a birds capacity of 50,000 while a four acres site at Anyaase would serve as a breeder and hatchery, where the parent stock would be raised and their eggs hatched to get the day old chicks.

According to Mr Wiafe-Yeboah, the factory would give direct market to 1,000 maize farmers in the catchment area, since maize would be needed to feed the birds and the project would be in three phases and during the first phase, the company would supply 10,000 birds every week to the local market.

Mr Wiafe-Yeboah said, the second phase would see an increase in the weekly supply to 24,000 birds   and further increase to 48,000 birds weekly during the third phase.