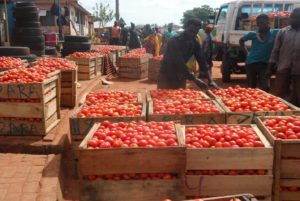 Ghana is the leading consumer of Fresh tomatoes in Africa and the second in the world, Mr Eric Osei Tuffuor, the Chairman of the Ghana National Tomatoes Traders and Transporters Association (GNTTTA) has stated.

He said presently Ghanaians consumed 90 per cent of fresh tomatoes produced in Burkina Faso which cost the country CFA56 billion annually in importation.

Mr. Tuffuor made the statement at a meeting with tomato farmers, traders, some executive members of the Association and Mr George Oduro, a Deputy Minister of Food and Agriculture at Tuobodom in the Techiman North District of Brong-Ahafo Region.

It was organised by the Assembly at the instance of President Nana Addo Dankwa Akufo-Addo following the farmers’ concern for government’s support for them to get stable and fair prices and ready market for the product.

The farmers appealed for government’s assistance when President Akufo-Addo went to the place last Friday as part of his three day working visit to the Brong-Ahafo Region.

He said because of that, the government, farmers, traders and all stakeholders “are required to play our parts” for the fresh tomato farming industry to thrive well for quality production of the commodity.

Mr Tuffour hoped if the country did the right thing, it could produce enough with the guaranteed quality to avoid importation.