May 24, 2018 General News Comments Off on Greening Ghana initiative is on course – Forestry Commission 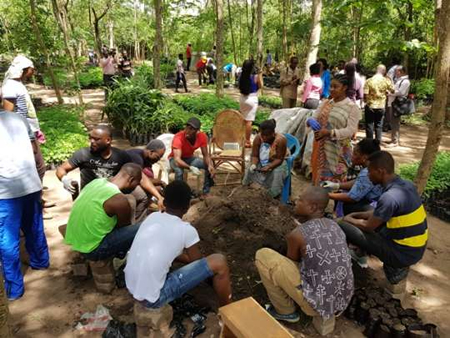 Mr Kwadwo Owusu Afriyie, the Chief Executive of the Forestry Commission, said the Commission’s programme to make Ghana green within the next 10 years has begun in earnest across the country.

He said the programme, which sought to engage 15,000 youth for the tree planting project under the Youth in Agriculture and Afforestation Module, as part of a greening Ghana initiative, had been oversubscribed with more than 33,000 youth applying.

Mr Afriyie said this when the Commission took journalists round the Achimota Nursery Site to see the progress of work.

He said the Ministry of Finance had allocated six million Ghana cedis a month to pay the allowances of the 15,000 youth engaged by the Commission, which was ready for disbursement.

The Ministry of Finance is expected to fund the programme with an amount of GH¢144 million over the two-year period of the programme.

The Forestry Commission and the Youth Employment Agency, in November last year, signed a service agreement to engage 15,000 youth across the country for the implementation of a Forest Plantation Programme.

The programme, under the Youth in Agriculture and Afforestation Module, is to enable the youth to contribute to environmental and forest protection in the country.

Mr Owusu Afriyie said the enthusiasm exhibited by “the young men and women of this country are desirous of getting some employment”.

He indicated that the planting programme should begin by June, under which graduate personnel would receive GH¢1,200 while diploma and non-graduates would receive GH¢800 and GH¢400 respectively.

He said the Commission had since met district and regional officers to ensure the success of the programme.

“We are going to schools, hospitals, dam sites and wherever we can find that needs trees planted, we will do so,” he said.

As a start, Mr Afriyie said the Commission had identified some places in Accra where the tree planting project would begin.

He noted that institutions such as West African Secondary School, Pantang Hospital, and Prampram Senior High School had all given the Commission acres of land to plant trees.

Other areas include the Weija Dam site and the Achimota Forest Reserve.

As part of the programme, the Commission would cultivate some 400 trees per hectare, many of which will be commercial trees for industry.

Mrs Edith Ansah, the Greater Accra Manager for the plantation project, who took journalists round the Achimota Nursery Site, said with the introduction of the programme, the nursery had been expanded to nurse over 250,000 seedlings by the end of the year. Already, some 120,000 seedlings had been nursed.

She noted that currently some 15 species of plants had been nursed to kick-start the project.