May 23, 2018 Africa/International, Lead Story Comments Off on South Korea announces $5b financial assistance for Africa 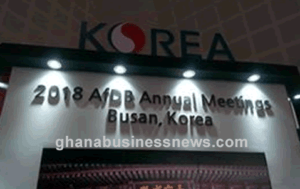 The South Korean government has announced a $5 billion financial assistance to Africa, a press release from the African Development Bank (AfDB) says.

According to the release copied to ghanabusinessnews.com, the government of Korea and the AfDB issued a joint declaration announcing the assistance following a Ministerial Roundtable of the Korea-Africa Economic Cooperation (KOAFEC) Conference taking place during the AfDB’s 53rd Annual Meetings in Busan, South Korea.

The package will be delivered over two years through partnerships with various development agencies, including but not limited to the AfDB, the release said.

“The package leverages resources from various Korean bilateral agencies and platforms, including the Knowledge Sharing Programme, the Economic Development Cooperation Fund, Korea Import-Export Bank, among others,” it added.

The release further indicated that , specifically, the AfDB President, Akinwumi Adesina and the Deputy Prime Minister of Korea, Dong Yeon Kim, signed three cooperation agreements for the implementation of certain components of the package by the Bank.

The first, it said, was the extension of the General Cooperation Agreement which allowed for the replenishment of the KOAFEC Trust Fund housed at the AfDB with $18 million.

“The Trust Fund, now totaling $93 million will continue to provide critical capacity building grants and resources for project feasibility studies. An Action Plan of 20 KOAFEC projects were endorsed during the Conference for 2019-2020 destined for a diverse group of countries and sectors,” the release said.

The Bank and the Republic of Korea also signed an agreement for the intent to provide up to $600 million towards the energy sector, said noting that the Bank and the Government of Korea also signed an MoU for the Korea-AfDB Tech Corps Programme which will allow for the exchange of technical expertise and human resources, to address ongoing challenges of youth unemployment in both regions.