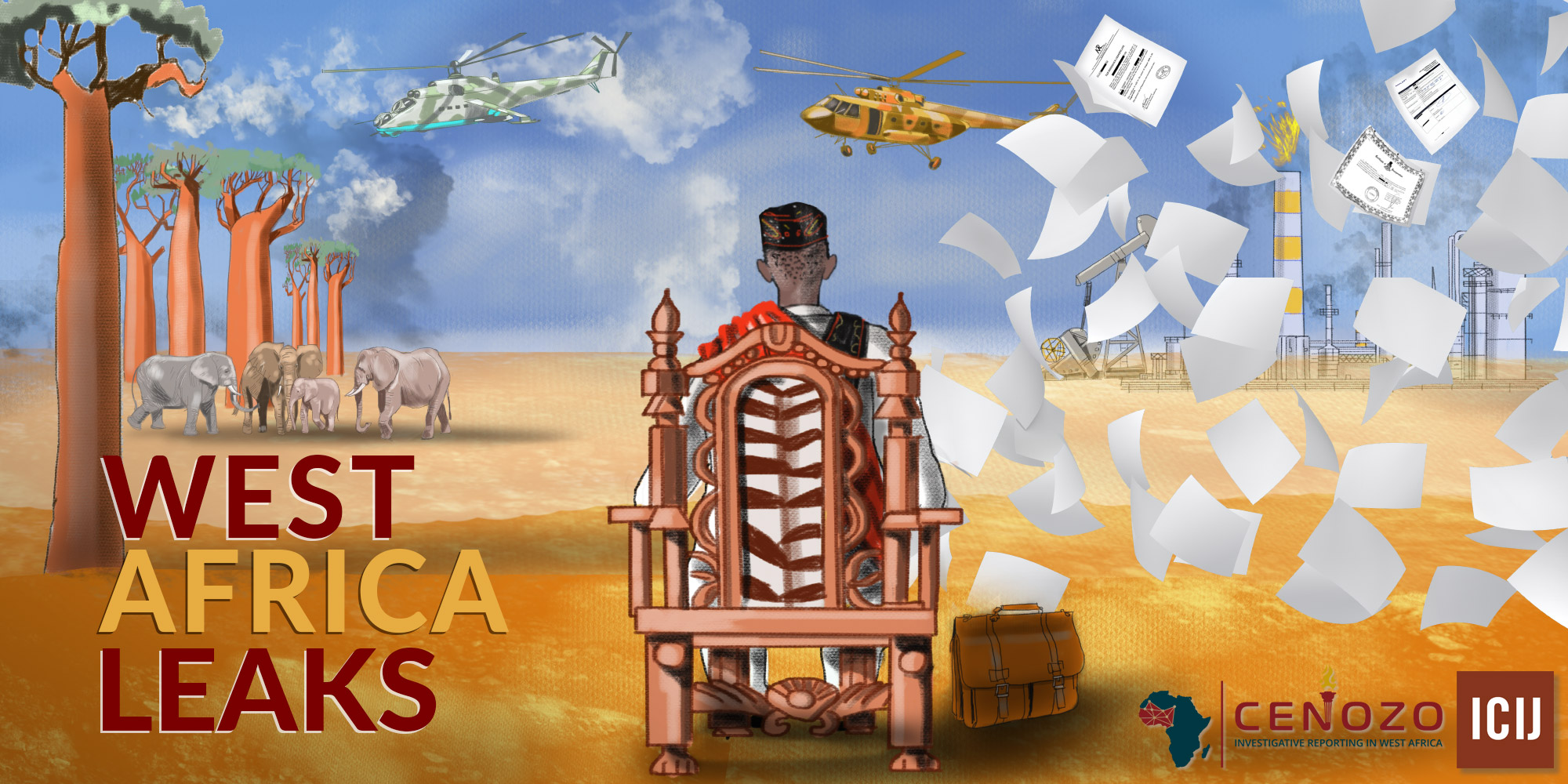 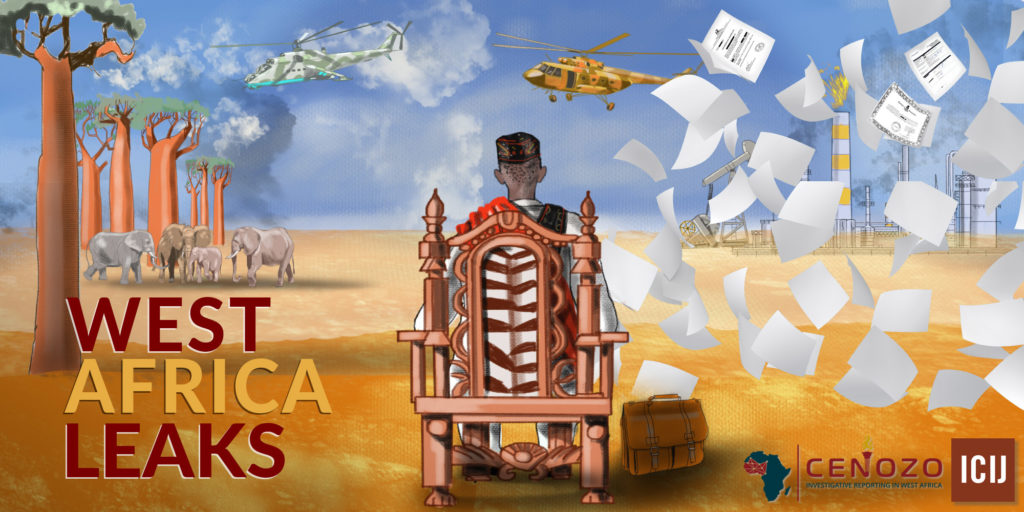 Government officials, arms merchants and corporations have spirited away millions of dollars from destitute West African nations through offshore tax havens, an investigation by journalists from the region and the International Consortium of Investigative Journalists has found.

Offshore companies were set up for a global engineering firm that avoided paying millions in taxes to Senegal, one of the world’s poorest countries; for a little-known entrepreneur who won a contract to build West Africa’s largest slaughterhouse and for a well-connected arms trafficker from Chad. In several cases, the companies, as well as the companies’ transactions and offshore bank accounts, were not declared or are only now being revealed in more detail.

The findings were drawn from a collection of almost 30 million documents, representing several leaked financial records obtained by and shared with ICIJ since 2012.

From Cape Verde’s islands of white-sand beaches and rocky volcanoes to Niger’s vast deserts, West African countries are further impoverished by tax avoidance by companies and individuals, while governments fail to stem the flow.

West Africa accounts for more than one-third of an estimated $50 billion that leaves the continent untraced or untaxed each year,  according to the United Nations. Overall, a combination of corruption, drug, human and weapons trafficking and other furtive import and export activities strip Africa of three to 10 times as much as it receives in foreign aid.

“For poor regions of the world like West Africa, the use of shell companies, tax evasion, aggressive tax planning, tax havens and offshore bank accounts can be dramatic” in the deprivation and suffering it creates, said Brigitte Alepin, professor of taxation at the Université du Québec. “These countries are in need of public finances, and these losses of tax revenues affect the basic services they can offer to their citizens.”

The money reappears in safe deposit boxes in European banks, as equity in high-rise New York condos and smooth limestone Parisian apartment buildings, far from the collapsing hospitals and other buildings of West Africa. It also fills wealthy investors’ pockets.

The leaked records include the secretive Persian Gulf real estate plans of a candidate in this year’s Mali presidential election; the Swiss bank account of an intimate friend of Togo’s hereditary dictatorship who manages the country’s overseas real estate; and a Seychelles foundation directed by the childhood friend of Liberia’s Nobel Peace Prize-winning former president, Ellen Johnson Sirleaf.

Often the offshore documents paint only a partial picture of the secretive financial affairs of prominent and wealthy West African individuals and businesses. In several cases, emails, spreadsheets and contracts don’t explain why a shell company was created or how much money was held in a far-flung offshore bank account.

Yet the files provide rare insights about untouchable rulers and power brokers who have long benefited from weak tax enforcement and supine courts in countries that struggle to hold them to account.

While several European nations have recovered small fortunes hidden offshore by citizens and companies exposed by previous ICIJ leaks, no African country has confirmed recovering a cent after previous revelations from these offshore troves.

Ousmane Sonko, a former Senegalese tax inspector who is now a member of parliament, said many West African tax authorities are doubly plagued: They don’t have the means to investigate complex foreign transactions, and, when  investigators do make headway, politicians find ways to torpedo their small successes.

Sonko said the situation is made worse by general ignorance of the importance of corporate tax – or any tax – to society.

“When people don’t even understand what taxes are, acting on something like the Paradise Papers is challenging,” Sonko said.

“If you talk about ‘tax havens’ in some countries in Africa, people will look at you and think you’re insane.”

In the Central African country of Chad, David Abtour, who married the sister of an ex-wife of President Idriss Déby, set up two companies after becoming involved in a helicopter deal with Chad’s armed forces.

Abtour teamed up with the air force chief of staff to help Chad buy Russian helicopters in 2006, French journalist Jacques-Marie Bougret reported. It was the beginning of a lucrative association between Chad’s leaders and Abtour.

Chad, which has been identified as one of the world’s 10 least developed countries, was at the time fighting Sudanese-backed rebel groups. In April 2006, rebels and government forces clashed close to Chad’s National Assembly palace in fighting that killed hundreds.

Chad’s army crushed the rebels, who had launched the attack from Sudan’s Darfur region, with tanks and attack helicopters – weaponry that proved critical in the scrappy, small-scale conflict.

At the time, Chad was declared the most “highly corrupt” country in Transparency International’s global corruption rankings. Deby’s government starved schools, roads and hospitals while lavishing millions of dollars on the military.

Politicians and rebels quarreled over a billion-dollar tax windfall from Chad’s oil boom, exacerbating instability. “Chadians are watching to see who will try to take the money, and how,” a New York Times guest columnist wrote in 2007.

From operating bases in Chad, Dubai and Paris, Abtour and his contacts provided Chad with ammunition in 2007, according to Bougret. Abtour fell out of favor in 2008, Bougret reported, after Chad’s prime minister replaced the head of defense.

The next year, Abtour set up two shell companies in Panama, according to the Panama Papers. One company, Bickwall Holdings Inc., had a bank account in Switzerland with HSBC Private Bank. The other, Tarita Management Corp., used UBS. In both cases, the companies were set up to issue shares to Abtour in a way that kept his identity concealed. Panamanian lawyers at Mossack Fonseca held no information on the activities of the two companies, which were closed in 2013.

In Niger, emails and contracts from ICIJ’s Offshore Leaks investigation show, a little-known New Zealand operator signed a $31.8 million contract with officials to build West Africa’s most modern refrigerated slaughterhouse.  Livestock is central to Niger’s culture and accounts for 14 percent of all goods and services produced.

The slaughterhouse was started but not completed. Nine years, three court cases and one coup d’etat later, it is unclear how much Niger paid for the nonexistent slaughterhouse, why an obscure offshore company won the region’s most lucrative livestock-related deal and whether any of the earnings were ever taxed.

According to Niger’s prime minister at the time, Seyni Oumarou, the company, Agriculture Africa, and the operator, Bryan Rowe, were chosen  for their “expertise and know-how” and “global reputation.”

“Never heard of them,” said professor David Love, a slaughterhouse management and construction expert who works with international organizations and national governments, including in Africa.

Rowe said that progress on the slaughterhouse was on schedule until a military junta overthrew the government in February 2010. Construction stopped. The new leaders refused to pay Agriculture Africa’s bills for work completed since 2009, Rowe said. He declined to say how much the company had been paid, citing confidentiality. Nor did he explain why he chose to create the companies offshore.

Rowe said that he had won three court cases in Niger seeking payment for work completed to date but that the judgments had not been enforced.

The Niger government did not respond to questions about the slaughterhouse.

Reporting under duress was one of myriad challenges faced during the five-month West Africa Leaks project.

Recurrent, lengthy and erratic power and internet outages hobble reporting in many countries in West Africa. Nigeria averages nearly 33 blackouts a month, many lasting eight hours or more. Another problem is the limited access to even the most benign documents or communications, and government agencies and politicians – even presidential candidates – regularly refuse to comment.

Several ICIJ partners felt pressure to halt publication of their findings from business leaders who threatened to withdraw newspaper advertising. Reporters also struggled with unreliable, essential equipment to do their jobs. Two reporters worked on computers whose malfunctions blacked out at least one-third of their screens.

The maid of honor

Despite the difficulties, reporters connected many West African power players to offshore accounts and companies. For instance, Liberia’s first female pharmacist, Clavenda Bright-Parker, was the sole shareholder and director of a Seychelles company, Greater Putu Foundation Ltd., according to Panama Papers documents.

The Panama Papers do not describe the specific purpose of Greater Putu Foundation Ltd. or disclose whether the company had a bank account.

Bright-Parker’s offshore role in Greater Putu Foundation coincided with disagreements between the Canada-based company in charge of the mine and Liberia’s government.

Canada’s Mano River Resources signed a deal to develop the mine in 2005 and later sold its interest to the Russian global steel and mining company Severstal. Residents and members of parliament have long complained that the owners of the mine did not deliver on promises for development.

Mano River Resources’ co-founder, Guy Pas, did not describe Bright-Parker’s work in detail but told ICIJ in an email that Bright-Parker “came recommended to take up this role” with the Putu mine to “defend its interest at the highest level” against ministerial pressure to have a larger mining company take over the project.

Reached by telephone, Bright-Parker said she had no knowledge of the Seychelles company and asked reporters to call back for more details. She did not respond to further calls or to emailed questions. Johnson Sirleaf said she was not aware of Greater Putu Foundation Ltd. and never discussed the Putu mine with her friend.

Other West African findings from the offshore files examined by reporters highlight techniques that profitable foreign companies use to reduce tax payments that could otherwise be owed.

Canada’s SNC-Lavalin, one of the world’s largest construction firms, benefited from a controversial treaty to avoid paying up to $8.9 million in taxes to Senegal.

SNC-Lavalin used a Mauritius company with no employees and no office as a conduit for $44.7 million in payments from a Senegal company throughout 2012. The payments were for SNC-Lavalin work to build a mineral sands processing plant.

Usually, Senegal would have collected 20 percent in withholding taxes on the payments, according to tax experts. But a treaty between Senegal and Mauritius allows multinationals such as SNC-Lavalin to avoid taxation on payments made through a company registered in Mauritius.

The company said it “structures its business in a tax efficient manner while remaining compliant with all applicable tax laws.” It denied making use of Mauritius to benefit from the tax treaty and said that it balances the obligation to pay taxes against its responsibilities to shareholders. The company added that it would have been exempt from paying the taxes anyway under a similar Canadian treaty with Senegal.

Not a beneficiary of this tax efficiency? Senegal.

‘Our wealth is sold off to rich multinationals’

“We’re one of the 25 poorest countries in the world,” said Ousmane Sonko, the Senegalese parliamentarian. “Our hospitals and schools have dirt floors,” Sonko said, “and our young men take rickety boats across the ocean to reach Europe.”

“We have the potential,” Sonko said. “But our wealth is sold off to multinationals that are already extremely rich and whose home countries are also rich.”

African countries are 20 years behind their European and North American peers in stemming tax abuse, experts say. But there a movement to stop, or at least slow, the flood of cash from leaving the continent.

In March, an organization called the West African Tax Administrations Forum launched a regional campaign to improve cooperation between governments and to crack down on tax abuse.

In a crowded Nigerian hotel conference room with tiger-stripe carpets, officials sat beside their national flags and discussed how to achieve their goals.

Officials had a lot to chew on, one panelist said, and there was much work to do.

“Like I always say, we are all partners in progress. We are here because together we believe we can do it.”