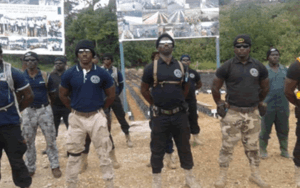 Operation Vanguard, the joint military and police task force set up to enforce the government’s campaign against illegal mining activities in the country has so far arrested 1,155 person’s at illegal mining (galamsey) sites.

They were apprehended in the Western, Eastern and Ashanti Regions.

Out of the total, 159 are Chinese citizens, 985 Ghanaians, seven Burkinabes, three Nigerians and one Indian.

The Public Relations Officer (PRO) for Operation vanguard, Squadron Leader Robison Omane-Agyei disclosed this in an interview with  the Ghana News Agency at Nsueam.

He said for the total Chinese nationals arrested only 20 have been tried and found guilty by the court.

For weapons and ammunitions, the PRO indicated the task force had retrieved 106 and 2,333 respectively.

He announced that the team has extended its operations to the Central Region and said they have already arrested one Chinese woman.

He appealed to the general public to assist the team with any information to help them arrest the bad nuts in the society who are still mining illegally.

Some cocoa farmers in the Sefwi -Bodi District of the Western North Region, under the …