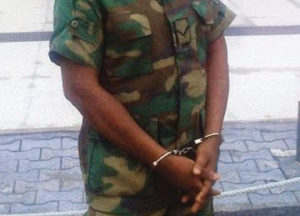 An Accra Circuit Court has sentenced one Patrick Akoto, unemployed to ten years in prison for possessing a parcel of compressed narcotic drugs without lawful authority.

Patrick who claims to be a soldier from 66 Artillery Regiment Ho Barracks, was charged with possession of narcotic drugs and falsely pretending to be a public officer.

Patrick pleaded not guilty to both charges, but after trial he was found guilty by the court, presided over by Mr Aboagye Tandoh.

He is to serve ten years in prison in hard labour for the possession and one year for falsely pretending to be a public officer both sentences to run concurrently.

Earlier the prosecution led by Superintendent Kweku Bempah had told the court that the complainants are Policemen from Formed Police Unit (FPU), Accra, who were on duty at Amrahia on the Dodowa road barrier at the toll booth, while the accused Patrick resides at Asikuma in the Eastern Region.

He said on August 16, 2017 at about 2230 hours a Toyota Urvan with registration Number GT 4106-17 pulled up from Oyibi direction with the accused on board wearing a military camouflage shirt.

He said Patrick ordered the police to give way for the vehicle to pass without searching it because he is a soldier.

He rained insults on the police to wit: “get away, who are you? Who is police, I am a soldier from 66 Artillery Regiment Ho Barracks and if I come down you will see the other side of me,” all this was to outwit the complainants.

The prosecution said the complainants suspected him and confronted him to search him and found out that he was sitting on a parcel of compressed leaves wrapped suspected to be Indian hemp.

Superintendent Bempah said the Patrick was arrested together with the parcel of compressed leaves which was in a black polythene bag.

The driver of the vehicle one Elvis Dadzie, a witness in this case mentioned that the parcel was with the accused when he boarded the vehicle.

The accused was interrogated by the complainants where he declined being a military officer.

He was therefore sent to the Adenta Police station together with the exhibits.