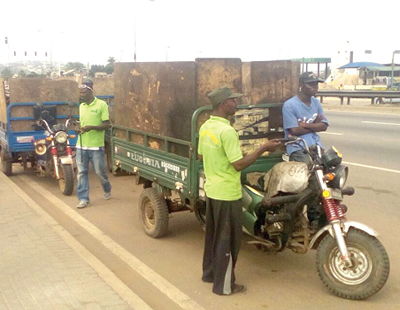 The Tema Metropolitan Assembly (TMA) has appealed to the Ghana Highway Authority (GHA) to ban refuse carting tricycles from plying the Accra-Tema Motorway.

According to Mr Felix Mensah Nii Anang-La, Tema Metropolitan Chief Executive, even though the Assembly has raised the issue with the GHA, they are yet to act on it.

Mr Anang-La noted that activities of the tricycle riders which mostly carried refuse from parts of Accra to the Kpone Land Fill site posed danger to the lives of other motorist plying the road.

The riders of the ‘borla taxis’, the popular name for the rubbish carrying tricycles, had been accused of dumping the garbage on portions of the motorway either intentionally or accidentally.

He noted that the TMA spent a lot of resources to clean such garbage from the road only for them to perpetrate the act again.

The MCE lamented that his outfit had no power to determine who plied which road therefore the GHA must exercise their mandate to bring sanity on the motorway.

Motorists for some time now had been calling on authorities to check activities of these tricycle riders as they drive dangerously on the motorway and dropped garbage on vehicles.

They have urged stakeholders to ensure the availability of more transfer stations where the “borla taxis” would dump the refuse collected from homes, while garbage trucks subsequently chart it to the landfill sites.