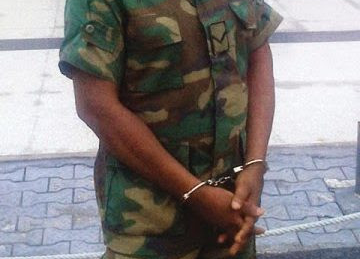 An Accra Circuit Court has ordered the Police to conduct an age assessment of a suspect who was arraigned for allegedly possessing military uniforms without authority.

The order came after Zuberu Osumanu an aluminium fabricator, had told his lawyer that he was 17 years and he would 18 next month.

Additionally Osumanu had informed Assistant Superintendent of Police (ASP) Patience Egyapong who is in charge of the prosecution that he was 18 years.

The dispute over Osumanu’s age then compelled the trial Judge, Mrs Abena Oppong Adjin-Doku to order for an age assessment at the Police Hospital to ascertain his correct age.

According to the court if the accused was 17 years, then the trial would be a nullity.

Osumanu has been remanded into a Remand Home to reappear on April 18.

The facts as narrated by the prosecution were that the complainants were Police Officers from the Greater Accra Regional Police Command.

According to prosecution, Osumanu resides at Joma, near Ablekuma in Accra and On March 25, this year, the Regional Police Command received information that some group of young men at Joma were engaged in land guard activities and they were robbing and terrorising residents at Joma, Ablekumah and other communities around the area.

Based on that, prosecution said the Police embarked on an exercise to fish out criminals in the area and on March 26, this year, between the hours of 1:00am and 5:00am and Osumanu was arrested at his hideout.

When he was searched a set of military uniform and a cutlass were retrieved.

Prosecution said Osumanu told the Police that the uniform belongs to one Kwasi but he failed to lead the Police to the said Kwasi.