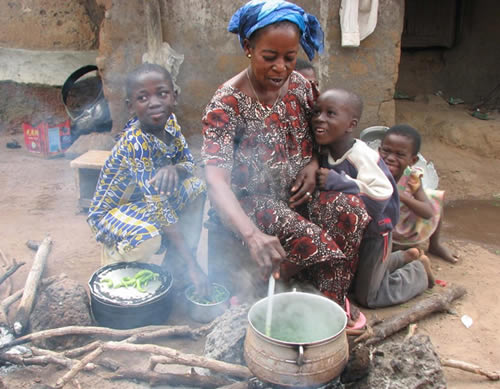 She said apart from ensuring the health of the Ghanaian woman, clean cooking would also free up time and energy which was hitherto used for gathering wood and long hours of cooking for other meaningful activities.

The two had toured Nsawam and other settlements as part of a fact finding activity on the use of clean cooking technologies.

“This means that household pollution is major risk factor” adding that household cooking had also disabled many people through burns and other injuries.

According her, even some men, especially those along the butchery value chain, bore the brunt of these fires as they clean and smoke the animal carcasses after the slaughter.

Hajia said government was looking at the use of Liquefied Petroleum Gas (LPG), as one of the solutions but welcomed the Alliance’s improved biomass drive technology as a viable part of the “solution”

She said institutions such as schools, hospitals, and prisons are being encouraged and helped to turn to clean cooking technologies and called on residents in districts with the requisite resources to take advantage of it under the One District, One Factory policy.

“Palm kennels, sawmills and farm waste are all viable sources of fuel for clean cooking. I encourage people close to these resources to take full advantage.”

Madam  Muthiah, said the Alliance was satisfied with results achieved so far in research, usability of their stoves and the appreciation of the need to use clean cooking technology.

She hinted on engaging more ministries and institutions in Ghana to drum home the concept of clean cooking which she said apart from its positive effects on the user, it was environmentally friendly.

Private universities to be liberated from oppressive policies – Minister