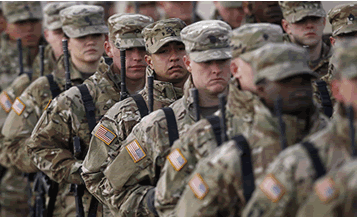 Parliament has approved the Defence Cooperation Agreement between Ghana and the United States but not without drama.

The Minority, before the ratification of the Agreement, staged a walkout soon after the Report of the Committee on Defence and Interior was presented on the Floor of the House.

Mr Dominic Nitiwul, the Minister of Defence, on Tuesday laid before Parliament the Document seeking to ratify an agreement for space around the Kotoka International Airport, which will serve as a camp for some US military forces in Ghana.

The Agreement stipulates, among other things, that the US Government would be exempted from paying taxes on equipment that is brought to Ghana.

Earlier, there were heated exchanges for and against the Agreement that would also give the US military access to some facilities in Ghana.

The Minority, who expressed unhappiness with the Agreement, said   the country’s sovereignty had been mortgaged to a superpower.

Before walking out, the Minority Members banged tables, with others singing until some Majority Members joined in the chaos with counter shouts.

The Speaker, Prof Aaron Mike Oquaye, in the middle of the confusion, walked out of the Chamber and after some minutes returned to restore order and to continue the proceedings.

The Minority demanded that amendments be made to the Report of the Committee.

Mr Haruna Iddrisu, the Minority Leader, after presenting his reservations over the Agreement, led the Minority Members out of the Chamber, leaving the Majority to continue with the deliberation.

Mr Nitiwul debunked the claims by the Minority, saying they were playing politics with the issue.

He said if the Minority NDC meant well for Ghanaians they could have rejected the Report at the Committee meeting level because 13 members were from the Minority while the Majority had 10.

He, therefore, called on members to approve the Agreement because no US Military Base would be established in Ghana.

Later, the House adopted the Report of the Joint-Committee on Defence and Interior, Constitutional, Legal and Parliamentary Affairs and ratified the Agreement.