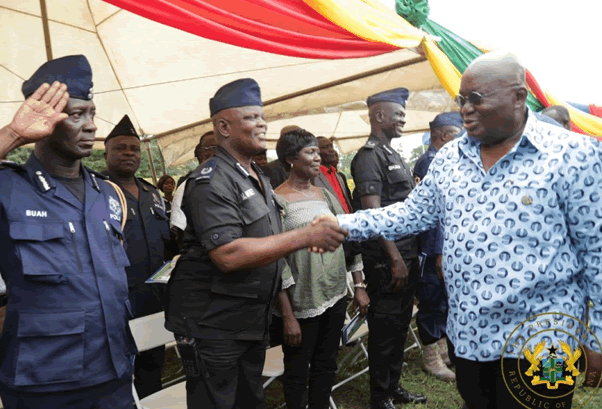 President Nana Addo Dankwa Akufo-Addo has assured the nation that his government would take the necessary steps to ensure the safety and security of Ghanaians.

To that end, government was determined to strengthen the operational inadequacies and capabilities of the Ghana Police Service to enable the institution, as well as other organs of state security, to provide the Ghanaian people the kind of service they deserved.

President Akufo-Addo gave the assurance on Sunday when he commissioned the Bekwai Divisional Police Headquarters, constructed by the Member of Parliament for Bekwai, and First Deputy Speaker, Joseph Osei Owusu.

The Bekwai Divisional Police Headquarters is the second building constructed for the Police in Bekwai, and would serve the people of Amansie West, Amansie Central, Bekwai, Bosome Freho and Fomena.

The President disclosed that this year, his administration would address the inadequate personnel numbers of the police, with the set recruitment of 4,000 more officers to shore up public security.

Additionally, government is also deploying some 8,700 Close Circuit Televisions (CCTV) across the country to make the police service efficient and robust force, “whose emphasis will be on proactive and preventive policing, rather than reactive.”

“This year, we are undertaking the rehabilitation of police stations across the country to standardise the infrastructure”, the President said.

“In addition to recruiting some 4,000 more police officers this year, negotiations have just been completed for the rollout of Phase II of the Alpha Project, which involves the deployment of a total of 8,700 CCTV cameras across all the districts, with three command centres in Accra, Kumasi and Tamale.”

The President stated that “at least 1,000 new vehicles are being procured for the Police this year. Already 200 pick-up vehicles have been allocated under Operation Calm Life, with 200 saloon vehicles to be delivered soon, with more to come.”

He assured that resources had been allocated for police kits, protective gear and adequate quantities of other essential equipment, urging the Police to “pay particular attention to the proper maintenance of these equipment and facilities.”

President Akufo-Addo commended the Bekwai Lawmaker for the constructing the facility, describing the initiative as “an excellent example of the contribution that a responsible citizen can make to the general welfare of the community.”

He stated that the most important things for a nation are the peace and safety of its people, and its territorial integrity.

“It is when these are guaranteed that citizens can go about their normal lives in security, and try to improve on the quality of their circumstances. We all sleep, feeling protected, when the men and women of the Police Service work to keep our nation, our communities and our streets safe,” he said.

President Akufo-Addo stressed that it was vital that the Executive offered its full support to the Police to allow it to perform its duty of maintaining law and order, especially with the current rise in indiscipline, lawlessness that threatened the rule of law.

“It is my hope and expectation that the Police in this Division will enhance their engagement with the communities they serve, because that is a more sustainable way of reducing crime,” he said.

The President also urged residents to co-operate with the Police and give them maximum backing in the discharge of their duties.

“When the community and police work together, we can be assured of our safety and security, and, then, we can channel all our energies and resources into building a progressive and prosperous nation,” he added.

President Akufo-Addo was confident that “with the citizenry and police joined together at the frontline in the fight against crime, we can help establish an orderly society, governed by the rule of law.”