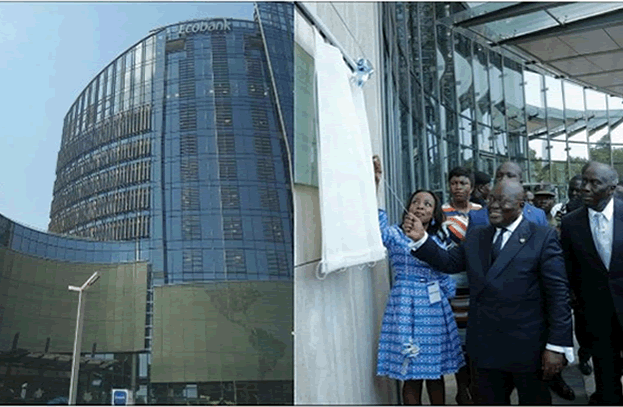 Ecobank Ghana on Wednesday officially opened its new Head Office in Accra, to boost Ecobank’s commitment level to the Ghanaian market and for improved customer service.

The new Ecobank Ghana Head office is a customer centric ultramodern edifice with two towers sitting on a podium and two levels underground and covers a 27,000 square metre area.

President Nana Addo Addo Dankwa Akufo-Addo commissioned the edifice and called on the banking sector to reduce lending rates to private sector players, who depended on loans for businesses.

Mr Daniel Sackey, the Managing Director of Ecobank Ghana, said the building underscored the bank’s mission to be a world class Pan African Bank and serve as a testament to the bank’s commitment in providing best services to clients in a convenient, reliable and accessible manner.

He said the bank, which started operations in February 1990, as a merchant bank from a rented bungalow, had now become the largest universal bank with 67 branches in eight regions of the country.

He said, through the launch of Ecobank Mobile App, the bank had been able to reach more than 388,000 customers in less than one year, who conveniently transact their banking business outside the branch set-up.

Mr Sackey said: “Our achievements also reaffirms the selflessness of our hardworking staff members as well as the support and confidence of our valued clients and stakeholders.”

Mr Terrence Darko, the Chairman of the Board of Directors of Ecobank Ghana, said the building symbolised the commitment and dedication of shareholders, staff, regulators and other stakeholders, and that, it should inspire hope in Ghanaians that “together, we can make Ghana proud”.

He said the liberalisation of the financial sector in the 1990s resulted in improved savings, enhanced deposit mobilisation, financial deepening and competition in the banking industry.

He said, operating initially as a merchant bank, Ecobank Ghana became the first bank to be granted a universal banking license by the Bank of Ghana in 2003, upon which it got listed on the stock exchange in 2006 and soared higher to gain the “biggest bank in Ghana” status in terms of assets, loans and deposits.

Mr Darko said the bank has relentlessly pursued its dual objective of being a world class pan African bank and contributing to the economic development as well as financial integration of the African continent.

He said Ecobank and its subsidiary businesses employ more than 2,000 people in Ghana, besides the many Ghanaians working in other affiliates on the continent.

He said: “Our commitment to honouring tax payments earned us the status of the Highest Tax Payer award in 2014, conferred on us by the Ghana Revenue Authority.”

Ecobank Ghana is a subsidiary of Ecobank Transitional Incorporated, a bank holding company, which is currently present in over 36 countries across Africa, dealing in 20 currencies.