Central African Republic: A nation in search of teachers

March 7, 2018 Africa/International Comments Off on Central African Republic: A nation in search of teachers 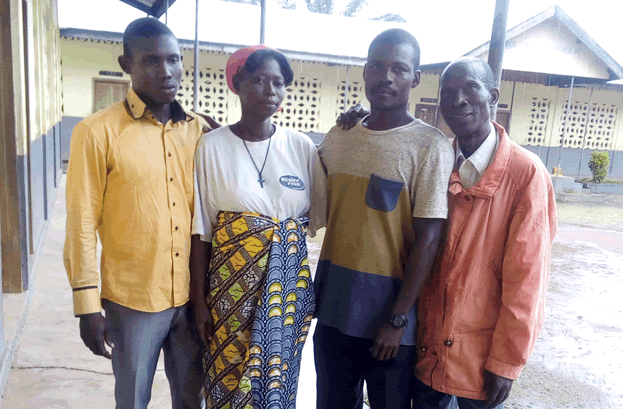 …War made Emma Mbathas a teacher

Five years ago, armed members of the Muslim militia called Ex-Seleka attacked the 31-year-old courthouse worker’s village of Molangue, a village south of the capital, Bangui.

“They shot a neighbor at close range before setting fire to his hut,” she said. “It was horrible to see.”

Knowing that Ex-Seleka fighters routinely rape, pillage and murder—the Seleka group overthrew the Central African Republic’s government in 2013 and controlled the country for about a year—Mbathas and her family fled into the forest.

Ex-Seleka fighters are those who refused to demobilize after their previous force, the Seleka, assumed power in government. Their rise was preceded by two decades of civil war that tore the country apart.

For almost three years, Mbathas and her husband and four children took refuge in pygmy communities where she taught literacy classes in exchange for shelter. When she finally returned to her village, officials from the Roman Catholic Archdiocese of Bangui and Jesuit Refugee Service asked if she might help them educate young people in a new project they had recently started.

“I could not refuse the hand held out by people in my community to help our children,” she said during a meeting of rural schoolteachers in Mbata, a town about 90 miles south of Bangui. “I had already begun to teach the pygmies without knowing that it was the call of destiny. I would like to participate in the development of my country through education.”

Now teaching a class of eight pupils, Mbathas is among 60 primary schoolteachers who have been instructing children in the nearby town of Mbaïki since late last year. They’re called “parent teachers” because, while they lack formal training as teachers, the villagers have chosen them to educate their children.

“Since there is a shortage of teachers in schools, parents have decided themselves to choose people who can read and write to teach their children,” said Father Alain le Patrick, a parish priest in Mbata who is a local supervisor of the project. “These people have not undergone a classical training. They are trained on the job.”

Other instructors at the meeting shared similar stories.

Daniel Mborobo, 65, was a retired teacher at Camp-Pêcheur, about 60 miles south of Bangui, when he and others fled Ex-Seleka attacks in January 2014. When it was safe to return a few years later, he found the village in chaos.

“There was no longer any instruction,” said Mborobo, a father of 11 boys and a little girl. “Some children were in the street without the least education. Others left the village with their parents. Everything had to be done again.”

He now teaches 15 third-grade pupils in a Catholic school in his village. 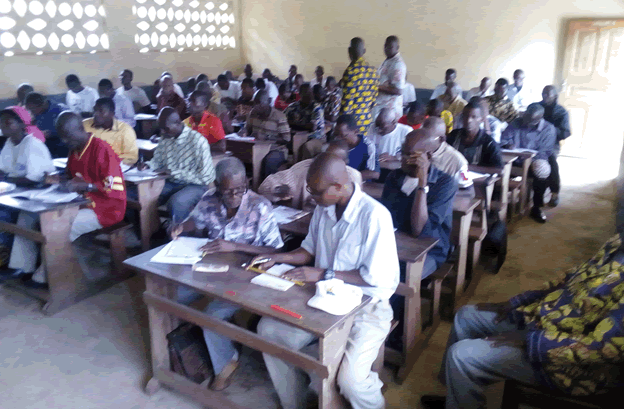 Knowing something of child psychology is important for keeping children in perspective and not viewing them as miniature adults, said Norbert Tebougtou, who oversees primary education for the Central African Republic’s ministry of education. “Then there is the methodological approach of each lesson to be taught,” he added.

The Jesuit Refugee Service, an international non-governmental organization, hopes to build 50 schools throughout the Central African Republic in the next five years.

They are sorely needed.

The Central African Republic is one of the poorest countries in the world. Its literacy rate is 57 percent, according to UNICEF. In 2017, the country achieved a 3-percent success rate in granting undergraduate degrees, the lowest rate in the world.

The government can’t provide security to educational institutions, and it lacks the money to pay teachers and other education-related civil servants. This year, public schools delayed opening their doors for several months while the teachers demanded payment of their salaries, which are in arrears.

“On several occasions, neighboring countries or development partners have paid the salaries of civil servants in the Central African Republic,” said Pierre Marie Kporon, an education professor at the University of Bangui. “The state is struggling to fulfill its mission. Projects like those of the Archdiocese of Bangui are trying to fill this gap. If there is war, we must educate people for peace. Education is the basis of everything. Well-trained minds promote development.”

But the teachers face hurdles.

Armed men have killed four workers with Jesuit Refugee Service in the past two years. The last was in August when a worker was stabbed in Bambari, a city some 240 miles northeast of Bangui.

“We have taken action to address the security challenge,” said Andreas Kahler, the Jesuit agency’s director in the Central African Republic. He said the group was working with the International NGO Safety Organization, a British nonprofit that provides safety-related training, alerts and other services to aid workers in high-risk areas. The Jesuit Refugee Service has increased security at its facility in the republic, he said, and has regular security consultations with its headquarters in Rome.

The Catholic groups are trying to recruit new teachers, but the task is challenging.

Father Le Patrick, in Mbata, said it was frustrating after the first recruitment effort “not to be able to find other people who can read and write in a municipality of 37,000 inhabitants, 90 percent of whom are illiterate.”

Still, the educators and parents believe the rewards are worth the dangers and frustration.

Six-year-old Béatrice Bosseba is a second grader in a Catholic school in Mbata. After spending a year and a half in the Republic of Congo, where her parents took refuge after attacks by Ex-Seleka in March 2015, the little girl forgot how to count from one to 10 and spoke only Sangho, a creole tongue that is one of the national languages of the Central African Republic, although French is also a national language that is spoken widely.

“Since she went back to school, she can count up to 20 and recite half of the French alphabet,” said Bosseba.

This story was published with the support of Al Fanar Media.