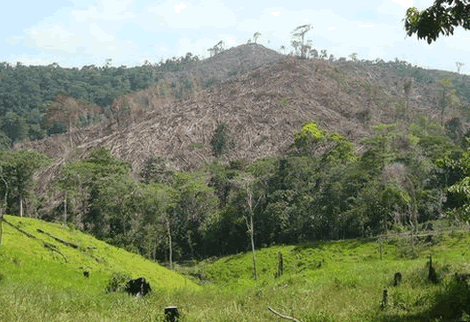 Environmental degradation is causing the nation 10 per cent of its Gross Domestic Product (GDP), which stood at GHc42.3 billion in 2016.

Professor John Tia Bugri, the Dean of the Faculty of Built Environment of the Kwame Nkrumah University of Science and Technology, said this when he made a presentation on the current state of land administration in Ghana: Challenges and bottlenecks at the Land Administration Reforms Conference in Accra.

He said the country’s forest cover had dwindled considerably due to illegal logging; illegal mining and other prohibited activities, and warned that, if proper measures are not instituted to curtail the menace, Ghana would soon import timber.

He expressed worry that, despite the nation spending of about US$100 million dollars in implementing the two phases of the Land Administration Project (LAP) for the past 14 years; it had not made any meaningful headway in resolving bottlenecks in land administration.

Some challenges that still persist in the land administration include; multiple sales of lands, delays in accessing land services, missing files at the Lands Commission, unauthorised personnel hanging around at the precincts of the Commission engaging in illegal deals, among others.

Prof. Bugri said: “The country borrowed that huge amount of money to implement the LAP, but the plight of land administration still persists because the guidelines for the LAP have not been strictly applied for sustainable land use”.

He said changes in the country’s political ecology required that, there should be changes in responding to land issues.

“We need to take into consideration the environmental and climatic changes in order to frame policies that are suitable for managing the stock of lands available.

“As a nation, we need to understand our stock of land resources because the management of the country’s land had been under customary practices, therefore as the society changes, we needed to use policies and legal instruments to regulate the changes in land governance,” he advised.

Prof. Bugri noted that, land administration in the country had been undertaken in a legal plural environment with two key actors- the Customary Sector and the State Sector, with land boundaries not clearly defined.

He said this situation had resulted in overlapping interests and iniquities in the distribution of lands with frequent struggle between the State and the traditional authorities.

In this arena of struggle, he said, there would be an emergence of the State as the dominance factor because it is the “Vested Trustee”.

In terms of land rights, he said, there were various rights under land management, including the developing right, timber right, ground water right, minerals right and estate right.

Therefore, there is the need to coordinate all these rights in the current dispensation of land administration to avoid conflict, he stated.

Prof. Bugri said for instance, the Mines and Minerals Act of 2006, which the Lands Commission had the right to give minerals concessions to companies or individuals to mine, however, on the same score, there is a service right
residing in the traditional authorities, where the minerals are supposed to be extracted.

“So in this scenario the State owns the minerals but the traditional authorities have the service right to the place, so how do we extract the minerals from the depth of the earth?.

This situation, he said, often creates a lot of conflicts between state institutions and the traditional authorities, who had the service right to the area, adding that; “There must be the right balance and fit-for-purpose approach in dealing with such situation”.

Findings from the World Bank’s survey in 2012 on land governance assessment revealed that, the country had good laws but lacked enforcement.

Regarding Land-use value, the report revealed that, there is chaotic development of lands, with no land titles, lack of transparency and accountability in land management resulting in corruption.