February 26, 2018 Politics Comments Off on President Akufo-Addo’s leadership is a blessing – Tema MCE

Felix Mensah Nii Annang-La, the Tema Metropolitan Chief Executive, has said that President Akufo-Addo’s leadership is an outstanding one that has brought blessings to the Ghanaian people.

“Sometimes when you sit back and look at all that is happening, you feel like you are in a dreamland. The ambitious projects that President Akufo-Addo is implementing are still dreams in most third world countries,” Nii Annang-La said.

In an interview on the sidelines of the election of the ruling NPP’s Constituency executives for Tema Central, the MCE pointed out that the implementation of ambitious programmes, such as Free SHS, One district, one factory, and the Planting for Food and Jobs was proof that Ghana was being shepherded in the right direction.

Going religious, he said, he was very sure that President Akufo-Addo was a gift from God himself and therefore the source of sudden blessings that Ghana was experiencing.

He said President Akufo-Addo has, in just one year upon assuming office, successfully started the implementation of the ambitious Free Senior High School programme that had made SHS education absolutely free.

The implementation has seen at least 90,000 children who would otherwise not have been in school, go to school.

He said the surge in admissions into schools had brought about challenges, but President Akufo-Addo had since made it clear that the challenges had been anticipated and his government was working to fix them.

Nii Anang-La said the NPP government had also allocated money for the 1D1F project, which was aimed at putting up a factory in every one of 216 districts of the country.

“Other ambitious projects that the government is pursuing include; the allocation of $1million to every constituency and the construction of a dam in every village in Ghana.

His words had been echoed by the NPP Member of Parliament for Tema Central, Hon. Kofi Brako, who said that it was only evil minded people who were not comfortable under the Presidency of President Akufo-Addo. “Ghana is definitely on course in the right direction because of the leadership of President Akufo-Addo. We are grateful to God for his life and leadership” Kofi Brako said.

“For instance, it is a well known fact that President Akufo-Addo’s government is the best so far. The two men had been speaking on the sidelines of the constituency election for Tema Central branch of the ruling NPP. 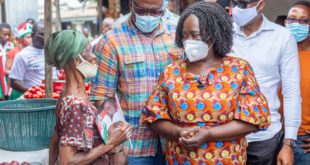