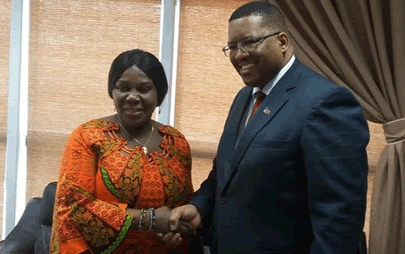 The Namibian Ambassador to Ghana, Mr Charles B. Yosob, has entreated Ghana’s Minister of Aviation to lend her full support to the re-entry of Air Namibia to the Ghanaian aviation industry.

He said processes are far advanced for Air Namibia’s re-entry, with the airline scheduled to re-launch on March 24, 2018, but needed more support from the Minister.

Mr Yosob said this when he paid a courtesy call on Mrs Cecilia Abena Dapaah, Minister of Aviation.

Air Namibia suspended its operations to Accra in June 2014, citing poor financial performance owing to low passenger numbers and difficulty in visa acquisition due to the lack of a mission in Ghana.

Mr Yosob said some of the factors, which informed the airline’s pull-out, had been resolved; particularly the lack of a mission on the ground to facilitate visa acquisition. He said since 2015, Namibia had established a resident diplomatic mission in Accra, making it easy for Ghanaians to acquire a Namibia visa.

The issue that still persist however was the promotional issues of Ghanaians not knowing much about Namibia and vice versa. He said his mission and the Ghana’s mission in Namibia, represented by Ms. Eliabeth S. Forgor, who was also at the meeting, were working hard to address that knowledge gap.

They were also working to boost tourism between the two countries. He said Namibia had a well-developed tourism industry, which Ghanaians could afford to visit and enjoy.

“I Hope with Air Namibia’s re-entry, we should be able to get people to come and visit, to experience Ghana’s hospitality. That’s what Air Namibia will facilitate”.

Mrs Cecilia Dapaah on her part, assured the Namibian delegation of the Ministry’s support for Air Namibia in their quest to re-launch in Ghana.

She aid Ghana had become a very attractive destination for travellers due to the measures put in place in pursuit of making Kotoka International Airport the aviation hub for the ECOWAS region.

She said Air Namibia was coming back because the conditions were now favourable; a move which was in line with the President’s vision to have a Ghana beyond aid, and his belief that African countries could develop on their own through this type of commercial, and economic cooperation.

“This is very good news. As much as we want people or airlines to come from other places, we entreat African airlines to take advantage of our open skies and come do business with us,” she said.

Mrs Dapaah said the launch of the Single African Air Transport Market (SAATM) by the African Union, will be very instrumental in helping to solve the problem of connectivity between African countries and benefit all African countries.

She said Ghana particularly needed an increased passenger and cargo throughput with the expected completion of its new terminal in April 2018, and thus, the need to tap into the SAATM to open up the country and Africa in general, for tourism and business.

She urged Air Namibia to prepare good deals for Ghanaians as well as attractive fares, which are key in people’s decisions to choose destinations in Africa.