February 2, 2018 Politics Comments Off on Bawumia returns from medical leave 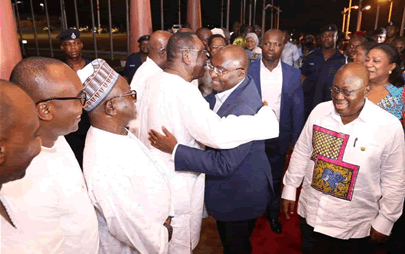 Vice President Dr Mahamudu Bawumia Thursday arrived in Ghana after his 13-day visit to the United Kingdom on medical leave.

Dr Bawmumia left Accra to London on January 19, 2018, for a medical leave on the advice of his doctors after he took ill.

At exactly 2004 hours, President Nana Addo Dankwa Akufo-Addo, accompanied by his wife, Rebecca, drove onto the tarmac of the Kotoka International Airport to receive Dr Bawumia who arrived on a British Airways craft.

The President accompanied the Vice President to the Jubilee Lounge, where senior officials at the Presidency, including the Chief of Staff, ministers of state, as well party functionaries and faithful, waited anxiously to welcome him.

There was spontaneous applause as the Vice President alighted from the President’s vehicle, walking majestically beside the President, looking hale and hearty and waving back at the crowd who had gathered to give him rousing welcome.

He exchanged pleasantries with ministers of state and government officials as he was ushered into the Presidential lounge where the two had discussions on his trip.

Some of the government officials and members of the governing New Patriotic Party (NPP) who were at the Airport to welcome the Vice President were the Interior Minister Ambrose Dery, Hackman Owusu Agyemang, Sheikh I.C. Quaye, and Director of Communications at the Presidency, Eugene Arhin.