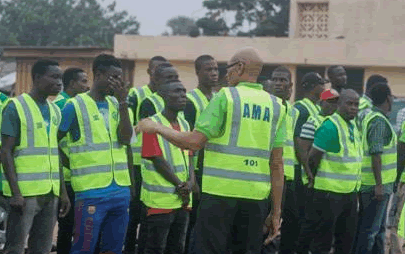 The Accra Metropolitan Assembly (AMA), has dismissed 11 members of its taskforce for failing to discharge their duties.

Mr Gilbert Nii Ankrah, the Head of Public Affairs, disclosed this to the media in an interview on the progress made so far on the ongoing decongestion exercise by the Assembly and the strategies adopted to ensure its sustenance since it began on January 8, this year.

He said the 11, who were stationed at some specific streets within the Central Business District of Accra, where spotted by the Assembly’s monitoring team taking unspecified sums of money from some traders, loitering and sleeping on duty.

“They were not enforcing the law and this is not acceptable … let me put on record that the AMA will not hesitate to dismiss anyone who sleeps on the job,” he said.

According to the Mr Ankrah, prior to the commencement of the exercise, members of the taskforce were warned not to engage in acts which would undermine the sustenance of the exercise.

“People all over the country and beyond are applauding us for the good work done. Our taskforce has been warned not to compromise but remain discipline. We will not hesitate to dismiss any recalcitrant person who turns to undermine the system,” he said.

He expressed satisfaction with the level of compliance by traders and stakeholders and assured that the Assembly would not relent on sustaining the exercise to rid the city of filth and lawlessness and thereby increase mobility.

Mr Ankrah commended the police for their support and called on all to rally behind the assembly’s strategies to transform Accra into a Smart, Sustainable and Resilient City where we can all “live in and love it.”

The PRO urged traders to abide by the directive and warned that anyone caught going against the metropolitan rules would be dealt with.

“We are calling on all pedestrians to endeavour to use the pavement since it is meant for them”, he stated.

The AMA began the exercise to rid hawkers and traders off the pavements and footbridges in the metropolis as part of efforts to decongest the city.

According to the Assembly, the activities of the traders and hawkers impede the flow of vehicular and human traffic and contribute to the heaps of garbage along major streets of the metropolis.

The ongoing exercise being spearheaded by the Metropolitan Security Committee (MESEC), comprises the police, the military and the AMA taskforce, and it’s expected to cover the Central Business District (CBD), Kwame Nkrumah Interchange, Kaneshie Market Area, N1 highway (Lapaz Intersection) among others.