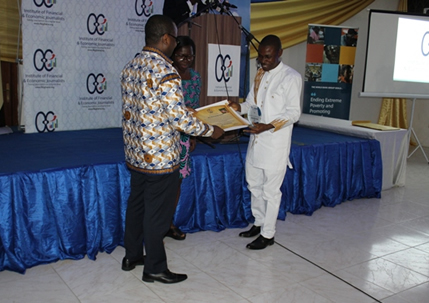 The Institute of Financial and Economic Journalists (IFEJ), has held its Fourth Flamingo Awards for business and financial journalists and crowned Felix Dela Klutse of the Business Day Newspaper as the Business Journalist for 2017.

He took home a citation, a plaque, an ipad and would have the opportunity to attend the World Bank Spring meetings in Washington DC, USA.

Other journalists received awards for the various categories under the Flamingo Awards held on Friday, January 26, in Accra.

Mr Emmanuel Bruce of the Daily Graphic was adjudged the Best in Agribusiness Reporting, Mr Maxwell Akalaari Adombila of Graphic Business was the Best in Local Economy Reporting and Ms Francisca Dickson Arhin of  GHOne TV won the Best in Business/Manufacturing Reporting.

Ms Jessica Acheampong of the Daily Graphic won the Best in Extractive Reporting whilst the Best in Development Reporting went to Mr Kwabena Adu Koranteng of the New Crusading Guide Newspaper.

He said GNPC was willing to collaborate with IFEJ to develop business and economic journalism.

Dr Maxwell Opoku Afari, the First Deputy Governor of the Bank of Ghana, said the importance of Financial Reporting could not be overlooked as it played a critical role in informing and educating stakeholders on new trends for socio-economic development.

Mr Rayborn Bulley, the President of IFEJ, said the stories presented for the awards improved and this made it difficult for the panel to determine the winners of the various categories.

He expressed gratitude to sponsors and major stakeholders for the continuous support in empowering financial and economic journalists through IFEJ.

Professor Gatsi, who represented Mr Koomson, the Chairman of the Panel, said the panel received 31 entries and a five point criteria were used to determine the winners namely: Potential of the story or feature to generate public awareness and impact policy direction; The originality, creativity and initiative put into the story or feature; The quality of reportage; The language used; and The balance and fairness of the reportage.