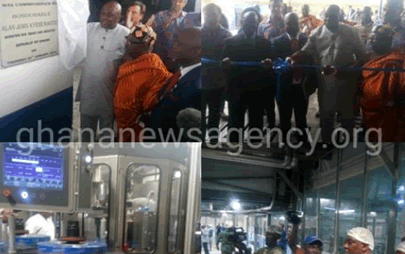 Voltic Ghana Limited, a subsidiary of Coca Cola Beverages Africa (CCBA), on Thursday launched a new packaging line to increase supply of its products to the market.

The fully-automated packaging line, located at Akwadum in the Nsawam/Adoagyiri Municipality, is part of CCBA’s investment in Africa.

Mr Doug Jackson, the Chief Executive Officer of CCBA, said the installation of the new line would serve as an avenue for sustained economic acceleration for customers.

He said it was CCBA’s plan to make Ghana the best production point in Africa.

CCBA, the mother company of Voltic, was committed to satisfying key stakeholders hence the investment in Voltic, Mr Jackson said.

He said: “Our investment in technology and people has been to increase the production capacity of Voltic while providing permanent employment to more than 450 Ghanaians and thousands more in the value chain.”

On his part, Mr Carlos Kingsley Ahenkorah, the Deputy Minister of Trade and Industry, said the milestone chalked was not only for Voltic Ghana but for the country as a whole.

He said the lifeline of every country was to serve its citizens with reliable and sustainable livelihood opportunities and so the Government was grateful to Voltic Ghana Limited for its continuous existence and support in the past 23 years.

Mr Ahenkorah said the Government was putting measures in place to help businesses to expand and create more jobs, as well as promote the growth of entrepreneurial opportunities for Ghanaians, particularly the youth.

“The Government is determined to reverse the trend of the last few years where businesses operated merely and mainly to service loans, pay taxes and electricity bills.

He commended the company for its resilience in contributing to the growth of the Ghanaian economy through job creation in the past 23 years and called for patronage of Made-in-Ghana goods.

Other key stakeholders present at the occasion included Dr Yaw Adu Gyamfi, the President of the Association of Ghana Industries, who commended Voltic Ghana Limited for its commitment to corporate social responsibilities over the years.