Ghana’s economy, among 10 countries is expected to be the second highest growing in sub-Sahara Africa after Ethiopia. The forecast by the economic analysis provider FocusEconomics, says Ghana’s economy will grow at 6.8 per cent in 2018. Ethiopia is expected to grow at 7.5 per cent.

The average for sub-Sahara Africa is projected at 3.3 per cent.

According to the analysts, a robust performance in exports and higher investment flows should buoy Ghana’s growth in 2018.

“The economy’s elevated public debt burden and a high level of non-performing loans in the banking sector pose downside risks to the outlook, however, FocusEconomics panelists expect GDP growth of 6.8 per cent in 2018, which is up from last month’s forecast, and project it moderating to 6.0 per cent in 2019,” it said.

It notes further that the economic activity gained ground in November as improving conditions in the domestic economy boosted demand. 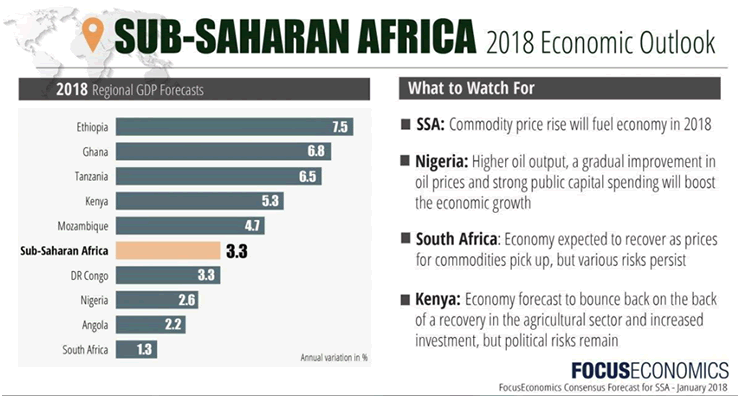 “Exports of gold, cocoa and oil surged in the month, pulling the trade balance out of deficit. While the economy is undergoing a fast-paced recovery after falling commodity prices swerved growth off track last year, a heavy public debt burden threatens to disrupt long-term stability. To help restructure the high debt load, the export-oriented nation sold GH¢5.29 billion ($1.16 billion) in long-term bonds on November 30, 2017,” it said, adding that, “side from issuing a new five-year bond, the sale was largely comprised of a reopening of existing bonds. Moreover, as part of the government’s commitment to rebalancing the country’s finances, multiple public sector reforms have been planned for next 2018. The reforms will seek to eliminate bureaucratic hurdles to efficient public service delivery, which should in turn better support the development of the private sector.”