Death in the frying pan

December 31, 2017 Feature Articles Comments Off on Death in the frying pan 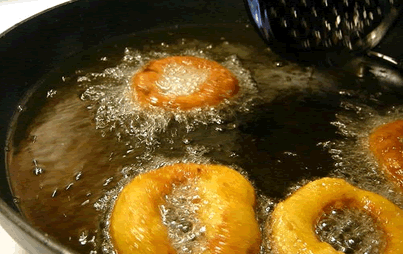 In the 21st century one would have expected more improvement in the appreciation of health our needs. Unfortunately a wide gulf of ignorance still surrounds humanity leading to untimely deaths.

And when this is placed besides the poverty situation of African countries and other developing countries the world over, the danger is exacerbated.

One area of concern is the habit of food preparation and consumption, an area of human life that directly affects the health of millions of people due to poverty and ignorance and sometimes the combination of the two.

Careful studies of frying of food and its related dangers can serve to eliminate large amounts of diseases and health risks that still afflict the greater number of the population.

Studies conducted by doctors in India on reuse oil for frying showed that India’s heart disease epidemic increased due to such dietary patterns and urged the public to avoid reusing any oil for frying food products as it increases the proportion of trans fats, a major source of heart diseases.

According to the doctors and the All Indian Institute of Medical Sciences (AIIMS) fats in food items are of four types namely saturated, unsaturated, mono and trans, with the last most dangerous and their presence in any oil going up if it is cooked for a very long time or as soon as it emits smoke.

Sometimes over reliance of fried food constitutes one of the areas where many people run into health disasters; indeed, it constitutes in what can be described as death in the frying pan.

A careful scrutiny of the situation in Ghana is not different since the country cannot do without oil and the tendency to reuse over and over again.

Many including the Member of Parliament (MP), the business person and even the street hawker have once queued in one way or the other for fried food.

They queue in restaurants, hotels or even at local joints where the cooking oil is reheated when you need a snack or is heated throughout the day for all the snacks. It’s likely no one had ever imagined the type of oil used or how safe is the reheated cooking oil before paying for the food.

All of us patronize and consume fried food products from big restaurants and hotels without knowing how many times the oil was reused. Maybe both consumers and those who reuse oil don’t even know there are health hazards or they ignore all danger signs for profit making.

Dr Sundeep Mishra, a Professor of Cardiology at AIIMS, New Delhi, who conducted several studies on reuse oils, said boiling oil for hours and reuse of refined oil leads to the increase of trans fats.

He said food habits in humans are such that heart disease becomes common and that the coconut oil being used in southern India for cooking was making them acute heart patients.

The Indo-Asian News Service (IANS) also quoted doctors as saying that interesting studies showed that only 13 per cent of educated individuals pay any attention to what they consume while the number of heart surgeries among the youth in India has also increased due to the consumption of reuse oil fried products.

The World Health Organization (WHO) has stated that Cardiovascular diseases (CVD) are the major cause of global mortality, which are caused by disorders of the heart and blood vessels, which includes coronary heart disease (heart attacks), stroke and hypertension amongst others.

Mr Eliasu Yakubu, a senior Nutrition Officer at the Tamale Teaching Hospital (TTH), described reuse oil as deadly and advised the public to avoid reusing oil more than once.

In an interview with the Ghana News Agency, he said oil must not boil beyond or above maximum capacity saying, “There are toxic substances referred to as 4-Hydroxy-2-trans-nomenal, which is associated with stroke,

Atherosclerosis or High blood pressure and cause cancer. The Parkinson disease and liver damage can all be associated with how oil is consumed”.

Mr Yakubu said clostribium-botulenum, which causes a condition called botulism, is a potential for food poisoning.

He said food particles that remained in the oil after frying if not properly filtered could attract bacteria for poisoning.

He said no oil is to be reused more than once and advised against mixing fresh oil into already used oil adding that there must be proper filtering.

The WORLD Health Organization during the celebration of World Heart Day 2017 reported that CVD takes the lives of 17.7 million people every year, 31 per cent of all global deaths.

Triggering these diseases, which manifest primarily as heart attacks and strokes, are tobacco use, unhealthy diet, physical inactivity and the harmful use of alcohol.

These in turn show up in people as raised blood pressure, elevated blood glucose and overweight and obesity, risks detrimental to good heart health.

Through the Global Hearts Initiative, WHO is supporting governments around the world to scale-up efforts on CVD prevention and control through three technical packages: MPOWER for tobacco control, SHAKE for salt reduction and HEARTS for the strengthening of CVD management in primary health care.

Launched in September 2016, the Global Hearts Initiative has since been rolled out in a number of countries. In those settings, health workers are being trained to better deliver tested and affordable measures to protect people from CVDs and help them to recover following a heart attack or stroke.

Though WHO is putting measures in place for the strengthening of CVDs it’s not out of place for one to suggest for authorities in Ghana to carry out a broad stakeholder consultation on reuse oil and the health hazards.

One would also suggest that the Foods and Drugs Authority (FDA) and the Ministry of Health (MoH) should make it mandatory for cooking oil producers to label the oils in simple language with specifications as to which ones are meant for deep frying or otherwise.

There is the need for mass education for the general public especially petty traders and restaurant operators who reuse oil more than once to halt the practice so as to save lives while regular and unannounced visits to hotels and restaurants to check their frying culture or environment is also necessary.

Needless deaths in the frying pan can be avoided but it would demand a collaborative effort.

How to start a business: A step-by-step guide

Compete or get disconnected – The aged, PWDs race for Ghana Card

Mining has been going on in Ghana for more than 100 years. Ghana earned its …